The Childhood Obesity Plan: One Year On, A Long Way To Go

Childhood Obesity Plan: One Year On

It’s now a year since the Government published its long-awaited Childhood Obesity Plan. The Plan aimed to “significantly reduce England’s rate of childhood obesity within the next ten years.” One year on, is that ambition any closer to being realised?

Childhood obesity represents a slow-motion car crash of ill-health and escalating health care costs. One in five children is overweight or obese by the time they start school, and this rises to one in three by the time they finish. As obesity tracks through into adulthood, it causes a range of health issues. Obese adults are seven times more likely to become a type 2 diabetic than adults of a healthy weight, and this can cause blindness and limb amputation. And not only are obese people more likely to get physical health conditions like heart disease, they are also more likely to be living with conditions like depression.

The economic costs of obesity are great, too. We spend more each year on the treatment of obesity and diabetes than we do on the police, fire service and judicial system combined. The NHS in England spent £5.1 billion on overweight and obesity-related ill-health in 2014/15 alone. If current rates of childhood obesity are maintained, the NHS will struggle to stay afloat.

Action on childhood obesity should be a national priority. This means the government must lead a coordinated cross-societal approach to support children to eat well and move more. Suspicions that the government might not be up for the task emerged late in the Cameron premiership, as the long awaited Childhood Obesity Plan was delayed, and then delayed again, deprioritised and ultimately shelved until after the EU referendum. Once Cameron departed, Theresa May showed little interest in leading on the issue. A ‘watered down’ version of the Plan was published a year ago, while the prime minister was on holiday.

In the intervening year, May’s government has been disappointingly lacklustre in implementing the Plan. A number of actions remain outstanding: the Plan tasked the Secretary of State for Education with leading a campaign to encourage all schools to adhere to the School Food Standards, with a large number of academy schools currently exempt, but no action has been taken to date. The Plan committed to introducing a Healthy Rating Scheme for primary schools this September, but the scheme has yet to be developed. The Plan also committed to updating the School Food Standards in light of refreshed government dietary recommendations, but no update has yet occurred.

Indeed, in the past year May’s government has invested more effort in removing school meals from those that need them, than they have in delivering these actions. The ill-fated commitment in the Conservative manifesto to discontinue free school meals for all infant pupils was met with a unified front of dissent from school cooks, head teachers, parents, and nutritionists. Food for Life contributed to a campaign that rendered this pledge toxic, the least popular in any party manifesto. ‘Lunch snatcher’ May retreated, and has now committed to continuing free school meal provision for all infants.

It would be unfair, however, to say that no progress has been made. The Department of Health has announced funding for a new obesity policy research unit at University College London, which will develop understanding into the causes of childhood obesity. The Government has also announced a new calorie reduction programme that will work with manufactures, retailers and the out of home sector to reduce the calories in popular foods such as takeaways, pizzas, burgers, savoury snacks and sandwiches.

The calorie reduction programme should be welcomed, but it mustn’t detract from the more important task of bringing about a wholesale shift in our relationship with food, so that freshly made meals, cooked from scratch and packed with veg, are the norm. This means changing the environment in which our decisions are made, reducing the availability of ultra-processed foods and making good food – fresh, healthy, sustainable food – readily available.

This has been the focus of our Food for Life programme. The Food for Life School Award makes it normal, easy, and enjoyable for children to eat well. The Award ensures meals are healthy and freshly prepared from seasonal and local ingredients; it supports children to learn about where food comes from, getting them out onto farms and learning to grow and cook. The results are striking: children in Food for Life schools are twice as likely to eat their 5-a-day compared to children in other schools.

Independent evaluation has shown that if every primary school in the country was a Food for Life school, a million more children would be eating their 5-a-day. In the long run, prevention pays. The government needs to step up to the plate, deliver the outstanding actions from the Obesity Plan, and put an immediate end to public health budget cuts that threaten, ultimately, to sink the NHS. 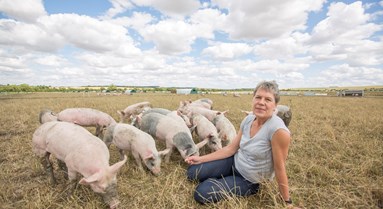