When it comes to genetic engineering, most of the attention in the UK has gone to crops and the global explosion of GE soy and maize cultivation.

However, new technologies have allowed the creation of far more complex organisms. GE mosquitos and fish are now commercially viable and ready to enter the global markets.

At least 35 species of fish are currently being genetically engineered around the world, including trout, catfish, tilapia, striped bass, flounder, and many species of salmon.  These fish are being engineered for traits that allegedly will make them better suited for industrial fish farming, such as faster growth, disease resistance, larger muscles, and temperature tolerance.

One example of these GE fish is GE AquAdvantage salmon… 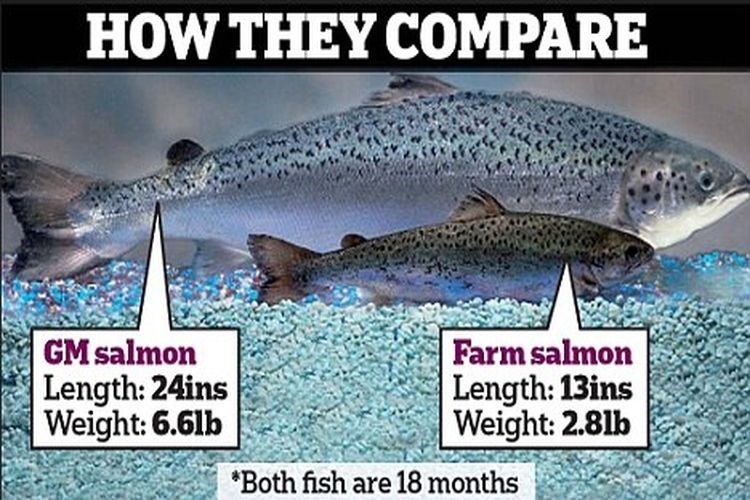 Produced by UK-based AquaBounty, the AquAdvantage salmon incorporates the anti-freeze genes of ocean pout and the fast growing genes of the Chinook salmon into an Atlantic salmon. The foreign DNA strands reprogram the salmon’s metabolism: the chinook gene signals the manufacture of extra growth hormones, while the ocean pout gene keeps that internal hormone factory switched to “on” during the winter months, when ordinary salmon stop growing.

The effect is that the foreign genes accelerate the fish’s growth: a tiny fry grows to a 13-pound adult in two years—twice as fast as an ordinary farm-raised fish. Thus the fish can be farmed year-round, in any climate, and more production cycles squeezed into less time. However, while substantially larger, the nutritional benefit of the fish is considerably less. 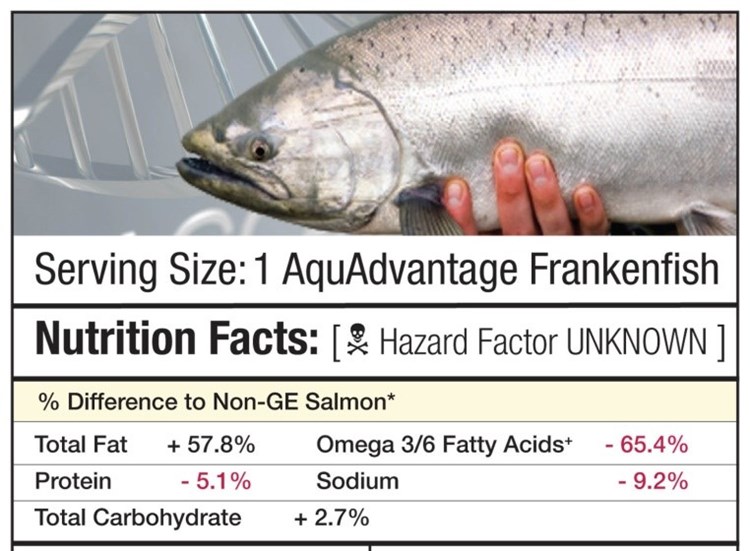 Challenging the approval of this technology will require an international effort since this GE salmon is truly transnational. The British company will produce the fertilized eggs in Canada before shipping them to Panama to grow in land-based systems and then will be sold in US supermarkets.

The environmental impacts would be considerable. While the salmon authorization is based on them being grown in a land-based system, if the genetically altered fish were to make its way into rivers and oceans, it could outcompete the smaller wild salmon for food and breeding grounds. The knock-on impacts on wild salmon and other wildlife could be devastating.

The U.S. Food and Drug Administration approved the salmon for sale in supermarkets in November 2015, while the Health Canada and the Canadian Food Inspection Agency followed in May 2016.

The GM salmon has already reached Canadian supermarket shelves. The first delivery arrived from Panama in June 2017 and sales have subsequently totalled 4.5 tonnes. Due to a lack of transparent labelling laws, the AquAdvantage is currently being sold to consumers in Quebec and Ontario unlabelled as GM. Given that a recent Ipsos Reid poll conducted in Canada found that 60% of respondents opposed genetically modifying crops and animals for food with nearly half supporting a nab on all GM food, this will surely cause concern.

GM salmon hasn’t yet hit US shelves. Despite its approval in the US, there is significant opposition to GE salmon. Certain retailers, including Whole Foods, Trader Joe’s and Aldi, have said that they will not sell the genetically modified fish while Senator Murkowski of Alaska is challenging the validity of this “frankenfish” by introducing a new “The Genetically Engineered Salmon Labeling Act”, which requires any salmon that is genetically engineered to be labelled as such.

Despite AquaBounty being a UK-company, GE fish is not approved for sale in the UK nor the EU. European consumers have consistently opposed GM technology in the food system. A 2014 YouGov poll found that 46% of adults had negative views about GM with only 6% of the public becoming “more positive” towards GM foods. It seems unlikely that GM salmon would find a sufficient market with the UK public. European law has consistently recognized the risks inherent in GM and has legislated accordingly.

That said, as Britain prepares to leave the EU, new questions around GM technology are being raised. The Department of Environment, Food and Rural Affairs has continued to emphasize a desire to embrace new technologies and innovation, which could include GM salmon. Similarly, future trade deals are being negotiated that threaten to open the UK market to AquBounty products and is one potential risk from a future transatlantic trade deal.

It’s critical that the British public continues to raise their rejection of GM to Government. GM has no place in the future of food and farming and should not be allowed into UK agriculture. It is the role of civil society to emphasize the potentially damaging impacts that GM could have on the environment, human health and small producers and remain vigilant to any move to adopt them.