Does the chicken on my plate cause deforestation and the destruction of other important natural environments?

Does the chicken on my plate cause deforestation and the destruction of other important natural environments?

The launch of the National Food Strategy, developed in consultation with policymakers, the food and farming sectors, NGOs, citizens and the public sector, sparked a great deal of debate about the health and impact of our diets.

You may have noticed a lot of discussion about food in the media as a result. Headline grabbers focused on unfounded fears that the Strategy would call for a “meat tax”. The “salt and sugar tax”, which it did recommend, received mixed reviews.

For those of us concerned about our overlapping climate, nature and health crises, the “big wins” were that the Soil Association’s Food for Life programme was praised as a model to emulate nationally in public procurement and food education. We also welcomed the Strategy’s focus on agroecological farming, which would include organic farming, something which the Soil Association has been continuously campaigning for.

To no one’s surprise, the meat debate sparked controversy

The “meat debate” has long been a source of controversy, whichever side you sit on. But the fact that the consumption of less and better meat is good for climate, biodiversity and dietary health is less disputed. In its 2021 sixth carbon budget, the government advisory body, the Climate Change Committee, recommends that, in order to reach “net zero” by 2050, UK meat consumption needs to decrease by 20% by 2030 and 35-50% by 2050. The National Food Strategy also recommends a 30% reduction in the consumption of all meat by 2032, highlighting the associated benefits for health and the environment. These high profile calls for a reduction in meat consumption in our diets, both from independent review Government committees, are very welcome.

Red meat is often portrayed as the ‘villain’ of the piece, understood to be bad for our health and for the climate, with cows producing methane – a powerful but short-lived greenhouse gas that contributes to climate change. But it is important to make a distinction between different types of farm system. Intensive systems, such as intensive poultry units for example, usually rely on imported feed, they create a lot of waste, and often have lower levels of animal welfare than agroecological systems. 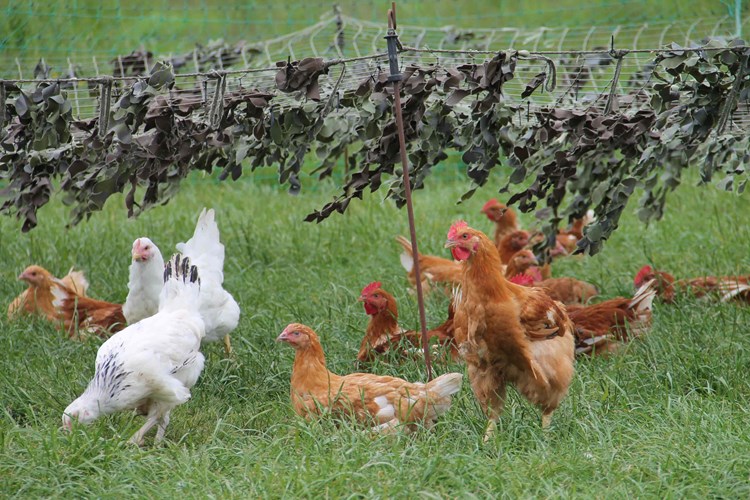 Chicken is often seen as healthier meat with a lower environmental impact and, in terms of greenhouse gases emitted by individual chickens, there may be a case to be made. A focus on the risks associated with red meat production and consumption may be one reason why our chicken consumption in the UK continues to rise - from 30.5 kg per person per year in 2000 to 36.3 kg in 2017. Red meat consumption, on the other hand, has fallen.

What is the environmental impact of eating intensively farmed chicken?

There are, however, significant environmental harms associated with eating intensively produced chicken. In Rivercide, a live-streamed documentary on the impact of industrial chicken farming on the River Wye, journalist George Monbiot mourns the ecological collapse of a once-thriving river. Nutrients from chicken manure, wash into the river from adjacent farms and are suffocating river life.

And the UK’s consumption of chicken doesn’t only affect our local environment. In Latin America, forests and other ecosystems are being destroyed at an alarming rate as a result of land-use change to grow soya for animal feed. Around three million tonnes of soya are imported into the UK each year, mostly for animal feed. Most of this high-protein crop is fed to chickens in intensive poultry units, where 50,000 or more birds (known as broilers) are housed in huge, purpose-built sheds where they quickly grow big enough for slaughter.

Around one billion chickens are farmed in the UK each year and 66% are broilers or meat chickens.

At least 65% of the UK’s soya is produced in Argentina, Brazil and Paraguay, all of which are high-risk countries in terms of deforestation and ecological impact. Soya production has contributed to deforestation and land conversion in biologically important areas, with rising global demand fuelling expansion into important habitats for wildlife.

The Cerrado in Brazil is thought to be the most biodiverse savannah in the world. It contains 5% of the world’s biodiversity and is particularly rich in plant, bird, reptile and amphibian species. Around one third of the species found there are endemic, meaning they are found nowhere else in the world. These include the giant armadillo, maned wolf and northern tiger cat. It is also home to other unique animals such as the jaguar, giant anteater and tapir.

Despite international recognition of its importance to biodiversity and as a vital water source, the Cerrado is being rapidly destroyed as the land is converted to agriculture. This includes soya production for overseas markets such as the UK. Other internationally recognized environments of importance to biodiversity and ecosystem services have been heavily impacted by land clearance for soya production for livestock feed. This includes the Gran Chaco and Paraná Delta in Argentina, large areas in the Amazon and the Pantanal, the world’s largest wetland.

The Westminster government has included a clause on “forest-risk commodities” in its draft Environment Bill, including soya. The clause places legal restrictions on the purchase of the commodities most likely to be contributing to deforestation. But it only addresses illegally produced products. Under the government of Jair Bolsonaro in Brazil, where the majority of UK imported soya comes from, there is often a fine line between legal and illegal and enforcement of existing legislation has been stymied by budget cuts to federal agencies and a loosening of restrictions. The Environment Bill should be strengthened to cover all types of deforestation and clearance of natural areas of high importance for climate and biodiversity, such as the Cerrado.

We need firmer laws here, commitment from UK companies and retailers and international action to address the continued destruction of environments crucial to the climate and biodiversity. We know that people are concerned about the environmental impact of industrial farming. Switching diets to less and better meat, which hasn’t been produced in an intensive livestock system with all their resultant impacts is a good way forward.

The Soil Association is calling for a transition to “agroecology”, sustainable farming that works with nature, like organic. The transition will require a phase-out of intensive livestock systems such as poultry units and the freeing up of land currently used to grow feed for livestock to enable us to become more self-sufficient in the food we eat.

Chicken from agroecological farming systems such as organic relies less on environmentally destructive feed, supports higher animal welfare and produces healthier meat. Producing and eating more fruit, vegetables and pulses alongside less and better meat will help us achieve an agroecological farming future, greatly reducing the impact of the food we eat on climate and nature.

How you can help? The Soil Association is stepping up its campaigning to address the environmental impact of intensively reared chicken. In the coming months we will need your help to drive through the necessary change. Please sign up for our newsletter to help us make a difference on this incredibly important issue.