At yesterday’s Soil Association agroecology conference we were thrilled to welcome almost a thousand people to our hybrid conference in London and online.

The 2 big questions running through the day were ‘Can agroecological farming square the circle for Nature, Net Zero and Food Security?’ and if so, what are the economics and politics of making this a mainstream transition? Watch each session via the YouTube playlist we have created below. Read my full analysis below that.

Can agroecological farming square the circle?

Professor Tim Benton trailed new analysis from Chatham House to show that we cannot look at sustainable farming in isolation from the demand side of the equation. Globally, relative to the foods we need for a healthy diet, we currently massively over-produce cereals and oilseeds for livestock feed and under-produce vegetables. As IDDRI argued in Ten Years for Agroecology, reducing demand for industrial grain-fed meat could release land pressure and allow both land sharing and land sparing for nature. By contrast, the theory that so-called ‘sustainable intensification’ can spare land for nature or climate solutions is not borne out by the evidence. ‘Jevon’s Paradox’ kicks in. As we intensify farming, we reduce prices, and it becomes economically rational to waste more food and feed it to livestock and eat more. Tim’s graphs showed with devastating clarity how rising yields have led to rising food waste and rising obesity, with no land being spared for nature.

Bringing the debate bang up to date, Tim revealed that a 15% reduction in pig and chicken production in Europe would make up for all the shortfall in grain from Ukraine/Russia. What is at stake is not food security so much as the future of cheap industrial meat production and consumption. But this requires political will to influence diets. As with energy strategy, the political will to influence the demand side is still lacking.

David Edwards of WWF-UK spoke about their ground-breaking Land of Plenty study, which has joined with the FFCC/IDDRI’s Farming for Change this year in signalling to the Climate Change Committee how their Land Use pathway can and must be revised in light of the new Environment Act legal target to reverse biodiversity loss by 2030. As the Soil Association argued in Fixing Nitrogen, cutting our reliance on Nitrogen fertiliser could be the single most important step in a joined-up pathway for climate, nature and health as well as boosting soil health and resilience. As David revealed, £2.3bn of Nitrogen is lost to the air or washed into polluted rivers – equivalent to half of all farming profits – and with Nitrogen fertiliser prices up three-fold on last year, the cost of that excess Nitrogen use will have only increased.

The politics of the transition

Secretary of State, George Eustice, gave the Keynote speech for the Conference. He was strong on the need to reduce our reliance on Nitrogen fertiliser and build natural fertility through investing in what Soil Association founder Lady Eve Balfour called ‘the living soil’. He reinforced his commitment to an Organic standard in the Sustainable Farming Incentive to ensure that holistic farming systems are recognised and organic pioneers are rewarded. He also reiterated that payment rates will go beyond ‘income foregone’ to genuinely incentivise farmers to opt in at the levels needed to achieve the ‘apex Species Abundance target’.

He revealed that he was just back from attempts in the US to identify ways to insist on higher standard accreditation for food imports in a US-UK trade deal.

Challenged by Jyoti Fernandez about the overseas footprint of pig and poultry production – 40% of the GHG emissions of UK farming according to WWF’s Land of Plenty – the SoS agreed that we need to look at better use of food waste as animal feed, if the treatment can be got right: “no SoS wants to preside over another Foot and Mouth crisis.”

In response to an audience question regarding the government’s ambitious tree planting targets, the SoS responded that alongside some large-scale woodland creation, he envisaged a much bigger role for trees in the farmed landscape, as agroforestry and on-farm woodland integrated into farming systems. This anticipated the conference session that followed the SoS speech, and the Minister’s words described almost exactly the approach and the title of the report presented by the Soil Association on a farmer-led approach to achieve the necessary tree revolution as part of a transition to agroecology.

More disappointing was the SoS’s reluctance to commit the UK to supporting the COP-15 draft targets to reduce pesticide and nitrogen use and his failure to commit to a Food Bill to underpin the Government’s White Paper response to the National Food Strategy, now billed for June. 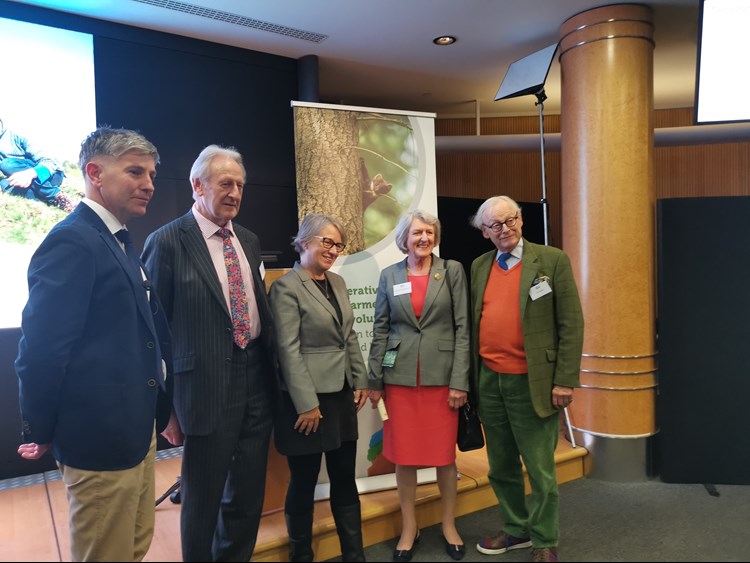 In a lively Peers session, Lord Curry and Baroness Bennett reflected that, despite the SoS’s strong rhetoric around soil health, it took a hard fight in the Lords, aided and abetted by the Soil Association, to push Government to commit to a Soil Health Action Plan for England.

Baroness Young warned that we are heading for a ‘car crash’ of competing demands on land without good governance and she trailed some of the likely conclusions of the House of Lords Enquiry into Land Use, announcing that “the Land sparing versus Land sharing debate is officially over”. Every witness to the Lords enquiry has agreed that the solution has to be multi-functional land use for climate, nature and healthy food production, and we need a National Land Use Framework to help guide this as called for in the National Food Strategy

Lord Deben quoted the Pope in arguing that climate change is but a symptom of the breakdown of our relationship with nature and said we must focus on the ‘Net’ in Net Zero: giving back to the Earth and ‘recovering the balance of nature’ as the great Rachel Carson put it in Silent Spring, 60 years ago this year.

The economics of the transition & why governance matters

Making the case for a farmer-led approach to achieving our tree planting targets within an agroecological transition, Clive Thomas of the Soil Association shared modelling which showed that we could achieve 85% of our tree planting goals in England via agroforestry and farm woodland with public funding of £90m/yr, a fraction of the £1.6bn total annual farm support. All with enhanced food production and co-benefits for nature, soil health and farm animal welfare.

Susan Twining of the CLA called for policy support for advisors and collaboration to help farmers access the skills and partnerships to bring trees into their farm enterprise. She expressed concern that individual farms integrating trees might be squeezed out of natural capital markets by their lack of scale.

Dustin Benton from Green Alliance dangled the potential for £1.7bn to come into farming from private carbon markets but set out the stark choice we face between ending up with lots of farm woodland on nature-friendly farms and lots of ‘land grabs’. If Government leaves this to ungoverned Carbon markets these will optimise for the least cost solution: land use change to large conifer plantations. The solution? We need a National Land Use Framework so land managers can understand and capitalise on what they are best placed to do and we need governance to ensure farms can easily ‘stack’ carbon finance, public money for public goods and biodiversity markets.

Strutt & Parker, eftec and Cumulus Consultants trailed findings of economic modelling for the Soil Association, which will be launched soon. A conservative valuation places the natural capital dividend from an agroecological transition at £72bn, in the same ballpark as the current net profits from agriculture. But are the incentives yet there for the transition? While the three-fold rise in Nitrogen fertiliser prices is closing the gap on costs of production for agroecological farms, and a strong ELMS backing whole farm approaches would make many agroecological farm types competitive, arable farmers might still be told by their agronomists to add yet more Nitrogen fertiliser in response to sky-high grain prices.

As ever, it is the dynamism and entrepreneurial conviction of agroecological farmers that gives most cause for optimism. Nature Friendly Farming Network Chair, Martin Lines, and Soil Association Farmer Ambassador George Young (aka @farmingGeorge) were clear that reducing reliance on inputs was the only economically rational future for farmers to de-risk their businesses and build their core assets of soil health and natural fertility.

Martin recounted how his confidence to transition to agroecological farming had come from visiting organic farms and called for Government to fund farmers’ role in peer-to-peer knowledge exchange.

The Soil Association will be responding to Martin’s call for more farmers to ‘open their farms and open their balance sheets’ to build the confidence of less entrepreneurial farmers when we publish in-depth case studies of agroecological farm business models later this year. Watch this space!

Our grateful thanks to the Conference sponsors, A-Team Foundation and Strutt & Parker, and to the funders of the Soil Association’s Ten Years for Agroecology programme: Ashden Trust, Esmee Fairbairn Foundation, Samworth Foundation and Thirty Percy.