Soil Association Certification’s 2019 research undertook an in-depth look into the drivers of choice and influence for people when shopping for food. It was conducted amongst 58 people who are not organic ‘converts,’ but ‘potentials’ – those who infrequently buy a small number of organic products, but are open to considering more. We spoke to men and women from a wide range of ages and different life stages, and gained an interesting perspective on their shopping choices.

From consumers to citizens

Many of the long-term drivers in attitudes towards food and the choices people make are consistent:

Yet, for all this, it’s not business as usual.

Shoppers are taking notice of a wide range of environmental and sustainability factors that just a few years ago would’ve gone unnoticed or been seen as more of a ‘nice to have’. Planet-centric food decisions are no longer regarded as something that are aspirational, but largely irrelevant to them and their family: many people are now looking to take action, having been influenced by powerful documentaries, environmental spokespeople and protests - such as Extinction Rebellion - as well as the amplifying effect of social media. However, they don’t find it easy.

Sorting through (mis)information as a shopper

In an age characterised by mistrust towards food manufacturers and retailers, scepticism around claims, ‘spin,’ and the fragmentation of media and content creators are growing. People are looking for clear and believable ‘sources’ to root their decisions in, as well as relying on their own experience and intuition.

Making sense of the growing number of environmental and sustainability claims at this time of unprecedented change means that many other factors simply get filtered out. However, a number of these factors are having an effect, and the research we undertook clustered them into three groups: emergent – not impacting most people yet but may in the future; dominant – widely understood and influential; declining – important but assumed, losing some relevance. 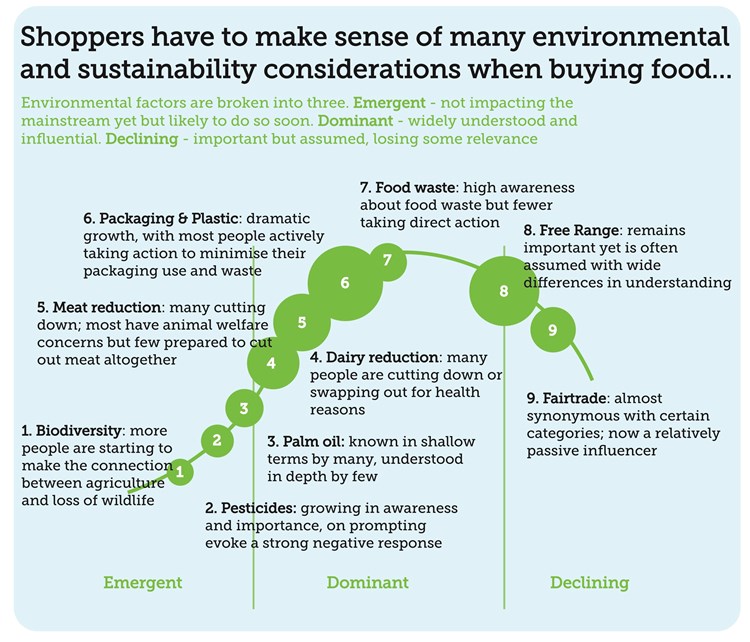 Conscious consumerism on the rise

Two emergent factors came through in the research: biodiversity has risen in people’s consciousness, with more people making the connections between agriculture and the loss of wildlife. Pesticides are growing in awareness, too - in particular, health concerns over residues left on or in food.

A number of factors have become dominant in the last two to three years, with customers questioning how food is made, what it contains and whether it is appropriate to be eaten at all much more than before. Palm oil was found to be polarising; while some people weren’t yet aware of it, many others understood the link to deforestation and were actively attempting to remove it from their diets.

Beyond this, there are more widespread and significant dietary changes: veganism is now widely known, if seen as a step too far for most in this survey. Despite this reluctance, meat and dairy reduction are seen as both healthy and environmentally beneficial, and more than this, they’re also regarded as easy to act upon – for example: switching dairy milk for a plant alternative and reducing the number of meals cooked with meat, or even trialling periods with a vegetarian diet. All of this is aided by the far greater choice that’s now available through supermarkets. 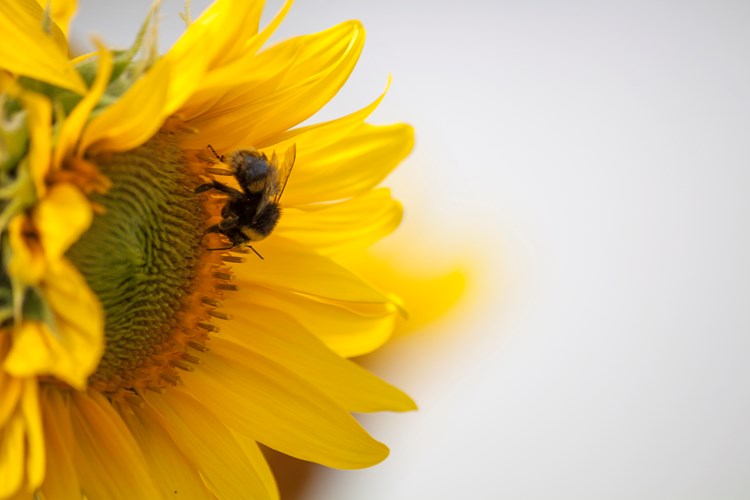 Taking action on packaging and plastic was the most marked change, with all of the research participants making sure to reduce or recycle the plastic they buy and use. Because they can clearly see and comprehend their plastic usage through local authority recycling initiatives, this factor felt personal to them. Food waste was the other big mover, although here, the evidence pointed to people feeling that it was more the responsibility of food manufacturers and retailers to work harder to minimise what is thrown away - this was put into sharp relief by the growth in food banks and food charities in the UK.

What characterises many of the dominant factors are simple, blunt and visually engaging memorable associations. Be it oceans polluted with plastic waste, the orangutan threatened by the massive expansion of palm oil plantations, or the image of caged chickens, the single-mindedness of these messages has clearly cut-through.

While Fairtrade and free range were declining factors, this doesn’t mean they’re unimportant to people when making food choices; rather, in certain categories, they’’ve become the benchmark standard that people look for. As such, decisions are often made by people on ‘auto-pilot,’ and they frequently don’t fully comprehend what they’re buying into

Opportunities for growth in the organic sector

Against this context of growth in interest in sustainability and the environment, organic has an enormous opportunity.

The research found that although more people were aware of organic, their understanding of it was only skin deep. Shoppers use experience and common sense to give it meaning, but this can lead to scepticism among some, as along with the perception of higher price and smaller ranges, the understanding of strict certification is limited – this runs the risk of people seeing it as a marketing initiative, instead of the verified legal requirement that it is.

However, when explained, the core organic message is extremely convincing. So, along with a relentless focus on making people aware of what it is, organic also needs to land its message with greater impact.

The time for organic is now. By creating easy to understand visual messaging and more clearly positioning organic as a solution to sustainable living with simple actions for people to take, we can create a greater emotional connection that lasts in shoppers’ minds. This messaging must be backed up with strong factual emphasis, and be hard-hitting about the implications of ‘carrying on the way we are.'

Our shopper research was conducted in collaboration with The Crow Flies. If Soil Association Certification licensees would like a copy of the full research slides, please email us with your licensee number.

David is Founder of The Crow Flies, a brand building and research agency, with over 25 years of client and agency experience across strategy, brand management, research, innovation and commercial roles. He's also been responsible for transformational and award-winning brand strategies, and communication campaigns. 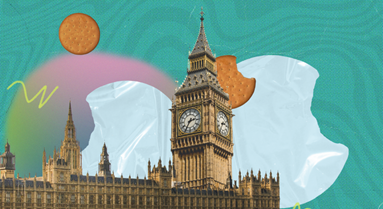 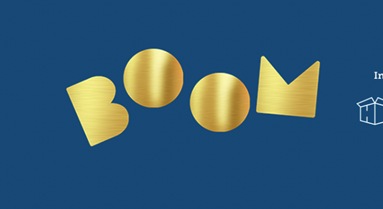