The conference, titled ‘Organic on the road to 2030', delved into key insights and current trends in the organic market, highlighting the increasing consumer demand for products with higher welfare and continued organic market growth, despite a slowing of non-organic trade.

Hosted by journalist, Rebecca Smithers, the conference welcomed speakers from businesses across the organic sector, including:

The UK needs to get trade right

Opening the event, Keynote speaker, Henry Dimbleby, described the recent New Zealand trade deal announcement as “disappointing” and slammed the UK government for “ignoring his advice”. He criticised the government for rejecting his advice to ensure trade deals do not open us up to cheap imports from other countries that have been produced with higher environmental impacts and C02 emissions, and lower animal welfare.

Speaking on this, he said: "There is one thing that risks destroying the whole transformation – trade, and getting trade right. There is no point in creating a system that looks after animals, sequesters animals and supports biodiversity if this is not reflected overseas.

"Lifting UK horticulture is about stability, Government support and a new concerted effort to bring new entrants in sector."

The latest data from NielsenIQ[1] presented at conference shows that, irrespective of the pandemic, the organic market remains in buoyant good health with 6.5% growth in the year to September. This is in marked contrast to non-organic which has seen sales flatline and start to decline over the last 12 weeks.

Speaking on behalf of NeilsenIQ, Mike Watkins informed delegates that since the beginning of the pandemic the online organic market has grown to 33% and organic lamb is currently one of the fastest growing sub categories, at 36%.

People are choosing organic for their health and the environment

"The research, shows two clear drivers: health and the environment.

"Fewer pesticides and chemicals are a key factor that underpin the rationale for shoppers choosing organic, with animal welfare also playing a part in the choices shoppers make."

"Trade deals should protect sustainable, British farmers, and we should be looking to deliver more of the benefits that agroecological farming, like organic, can provide for wildlife, soils, people and climate.”

[1]Based on Nielsen RMS data for the Organic category Soil Association Defined for the 52 week period ending 25th September 2021 for the GB total retail market.
[2] You can hear more in-depth findings of our 2021 shopper research at our upcoming webinar, Sustainability and organic: joining the...dots on 9th Nov at 2.00pm.
Related posts

Sustainability and organic: joining the dots... 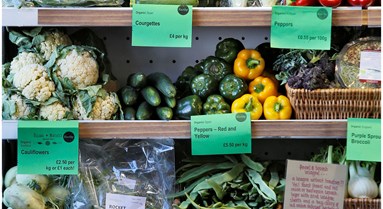 When it comes to organic, using the right sustainable and environmental packaging is key