The government has today published a series of ‘technical notices’ outlining potential scenarios in the event of a ‘no deal’ Brexit.

Brexit presents an unprecedented challenge to the food and farming sector, with the risks and uncertainty already affecting businesses.

Chris Atkinson, Soil Association head of standards said; “Frictionless trade with the EU is critically important for the food and farming sector. It’s vitally important the UK remains in the customs union and stays aligned with EU standards on food and environment as a minimum. A no deal Brexit is the worst possible scenario. The technical notices published today (23 August 2018) offer no further clarity to businesses and provide neither reassurance nor advice on how to prepare for a potential ‘no deal’ scenario. They confirm the scale of the challenge we face and the vital importance that the UK achieves a workable deal with the EU.”

Chris continued; “The information outlined raises concerns that imports and exports to and from the EU may be held up for months.  The critical issue of continuing recognition by the EU of the organic status of products certified in the UK is left entirely unresolved by this paper and a similar document that was issued by the EU some months ago. We are also concerned that a new UK-owned imports traceability system to replace the current EU system would need to be in place by 29 March 2019. In our view this is an unrealistic goal within the time frame. Delays could significantly hinder trade.

“The EU is the UK’s closest, largest and most important trading partner, therefore ensuring effective trade with the EU should be the immediate priority over trade deals with other countries. Such deals pose potential risks, particularly to UK food and farming, partly due to the risks of allowing food of lower production standards to enter the UK.  Irrespective of what form Brexit eventually takes, there is serious concern that UK farming will also lose the ring-fenced budget for farm payments that all other EU countries will continue to enjoy.”

…we’ve got a small favour to ask. As a charity we rely on fundraising from members of the public to do our vital work. We champion a world where people, farm animals and nature can thrive – and we’ve made huge steps forward working with farmers, growers and researchers to find pioneering and practical solutions to today’s farming challenges. But there’s so much more to be done. 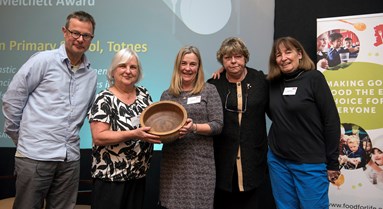 Powerful calls to action for children’s food from FFL conference