This new report 'Antibiotics use in Organic Farming; Lowering Use Through Good Husbandry' from the Alliance to Save Our Antibiotics calls for the high animal husbandry standards, as seen in organic, to be recognised as a solution for lowering farm antibiotic use.

The survey also included pig and poultry farms and found that antibiotic use per livestock unit by Soil Association Certification organic pig farmers was 75 times lower and for chicken farms five times lower than the national average.

UK farming sector can build on success reducing antibiotic use

UK farm antibiotic use reduced by nearly 50% between 2014 and 2018, but overall use remains far too high, and the case could be made for a stronger focus on husbandry practices when considering long-term antibiotic reductions at a national level. This case is particularly strong if we acknowledge that more intensive farming remains dominant in pig and poultry production. Certain diseases continue to be a challenge in these systems and to control them there has been increased reliance on the use of substitute medication that also carries risks, such as zinc oxide to deal with post-weaning diarrhoea in piglets, and ionophores to deal with the intestinal disease coccidiosis in poultry. 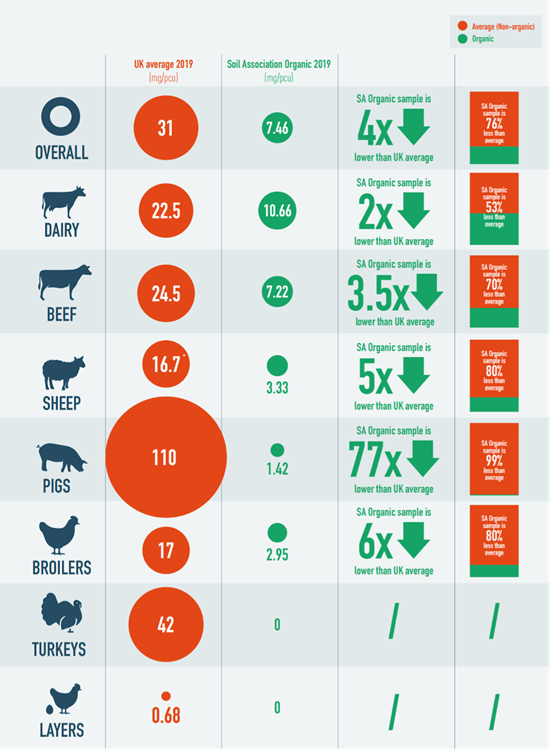 Lessons from the high-husbandry requirements of organic

Organic standards aim to promote good health and welfare so that disease is exceptional rather than routine. By aiming to minimise disease, these standards are also likely to reduce the need for antibiotic treatments. Some key organic standards include:

As part of this project the Alliance to Save our Antibiotics interviewed a number of Soil Association Certification organic farmers and asked them what key husbandry factors do they practice to minimise disease and keep antibiotic use low. They said:

Learn more about our campaign to reduce antibiotic use in farming, as part of the Alliance to Save our Antibiotics.