Great news for soil! Our new report sets out what’s next

In the House of Lords this week, there has been a critical vote and announcement to support the magical world beneath our feet: our soils. It is therefore a great moment to launch our new report: Saving our Soils.

You shall go to the ball!

Soils have been referred to as the Cinderella of the natural world. Working busily away, out of view, dirty, unloved and neglected. A poor relation of other environmental assets, water, air quality and even biodiversity as a policy priority. Thanks to the great work by many including key Peers in the House of Lords, (playing the fairy godmother in this episode), it looks like things are changing.

Soil will be attending the ball, by which I mean of course, the House of Commons debate to finalise the Environment Bill, before achieving Royal Assent.

Firstly, on Monday the 6th of September, Baroness Natalie Bennett of Manor Castle tabled an amendment to make soils centre stage on the front of the bill, alongside water, air and biodiversity. I am delighted to say that the House of Lords voted this through, 209-166. This amendment would secure soil as a key priority with its own long-term target to secure its recovery. All that remains now is for this amendment to be accepted by the House of Commons in October/November. Let’s hope they don’t play the ugly sister!

Secondly, On Wednesday the 8th of September the Earl of Caithness, put forward a complementary amendment to secure a Soil Management Strategy for England. This amendment did not go to a vote, but for good reason. It spurred the Government into announcing a commitment to a Soil Health Action Plan for England.

This is fantastic news. For too long, soil has lacked any cohesive policy framework. There are a lot of people to thank for this progress, not of course forgetting Baroness Bennett and the Earl of Caithness themselves, and the many peers who supported the amendments, but also the Sustainable Soils Alliance and the Game and Wildlife Conservation Trust who have played a role in helping draft the amendments alongside the Soil Association.

But there remains a lot to work out

All eyes are now on the House of Commons next. The government's position has been to seek to reverse any such amendments, so now is the most critical time to call for a reversal to this position. But it is also absolutely vital that this action plan is not a half-hearted one. It therefore feels like a perfect moment to put out our new report Saving our Soils.

In this we call for national soil strategies. Whilst this aligns with this announcement for an England action plan, we argue that such a strategy must support a transition to agroecology and must ensure clear action around seven key areas. In England, this means we need to see the recent steps being taken on soils, ramped up, and fast. In particular, ELM, the new subsidy system for farmers, needs to be taken even further than the first tentative and welcome steps seen through the soil standards, to achieve real progress in these seven ways to save our soils. And we are calling for similar strategies in Wales, Scotland and Northern Ireland. We have reached the end of the first half – let’s make sure this is just a curtain raiser. 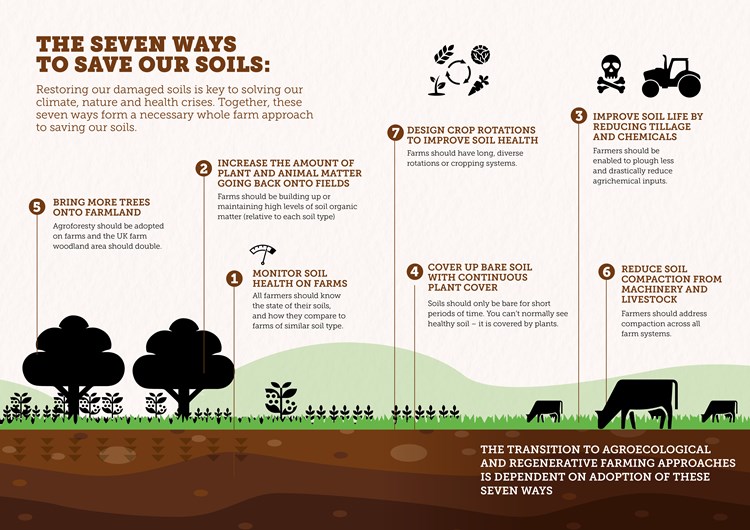