How one farming couple started mob grazing their herd 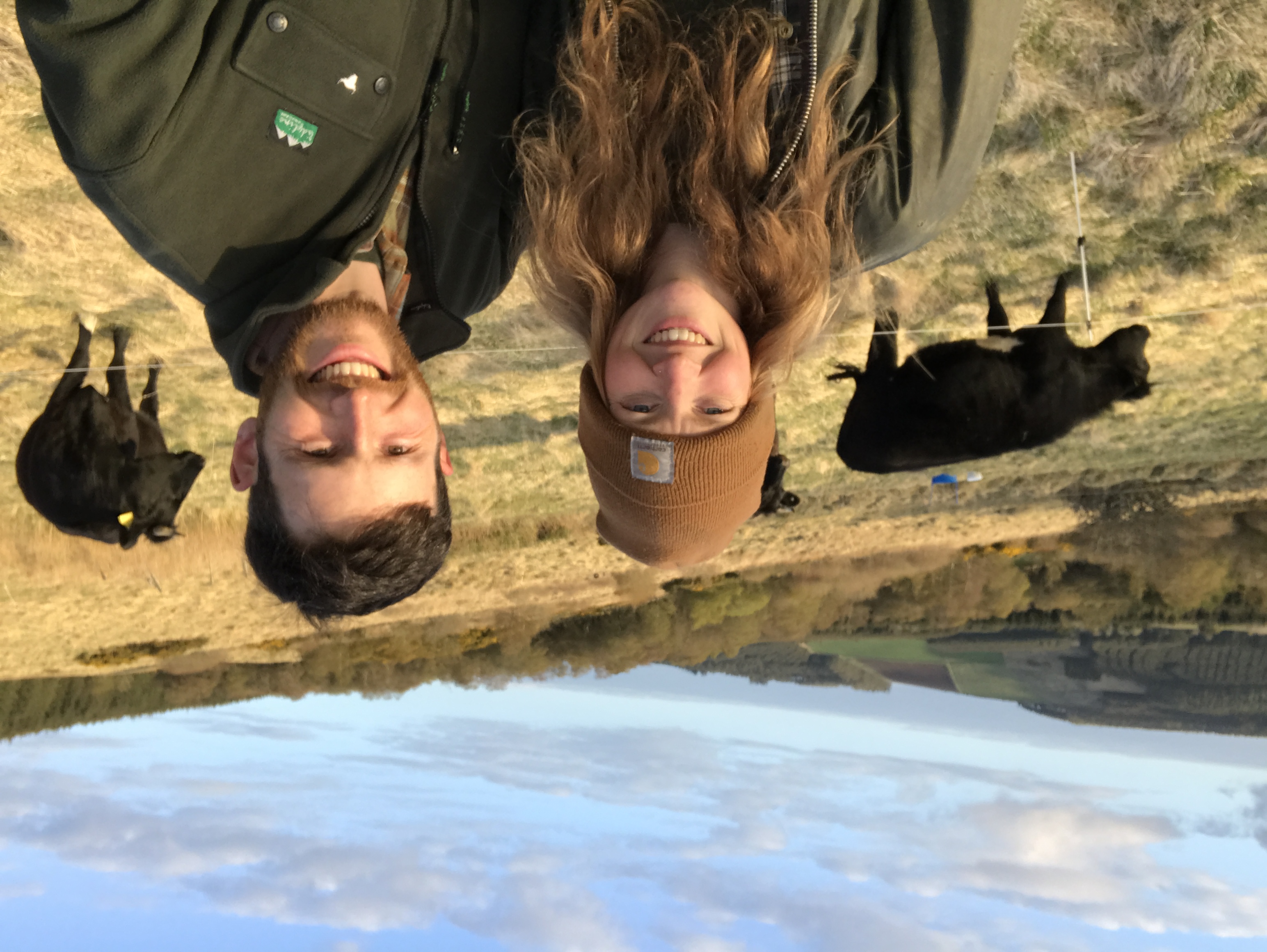 James and Nikki Yoxall are small-scale Shetland cattle farmers on an 18-acre/7.2-hectare farm in Aberdeenshire. Two years ago, they moved 650 miles from West Sussex to Scotland to pursue their dream of nature-friendly farming. They were lured by the outdoors and the slower pace of life, as well as a desire to farm organically.

James and Nikki first came across rotational grazing principles while working at agricultural college in West Sussex, thanks to a forward thinking and innovative Farm Manager. "The farm manager there was a proper pasture geek!” says Nikki. “He had really well-planned rotations. We’ve had a good insight into a more progressive way of thinking – even if we didn't know it so much at the time.”

Nikki and James take an agroecological approach to their land, underpinned by their consciousness of the effects of climate and environmental change. “Taking a more environmentally conscious and embedded approach to farming just absolutely makes sense to us,” says Nikki. “We’re working to promote wildlife and biodiversity, and soil health is central to our whole approach. We live here; we want it to be beautiful, to have amazing wildlife – and we don’t want to disturb the natural balance. I can't think of any other way of working.”

Learning from the mob grazing experts

The couple, who are new to farming, have sought expertise from people who are already doing mob grazing and nature friendly farming. James went to Soil Association Scotland’s event at Lynbreck Croft in 2018, and heard mob grazing expert Rob Havard speak. “Everything he said just made sense,” says James.

After this, James and Nikki decided to take a year to observe the ground before making any big decisions about what to do with it. This included not even getting any chickens. “That was really hard,” says Nikki. “We’d left chickens behind down south. I was counting down the hours until the end of the year so we could go out and get some chickens!” But the process gave James and Nikki time to read up on mob grazing, mull it over and decide if it was right for them.

At the end of that first year, they bought two cows and got to work, putting mob grazing principles into practice. “I’ve just become more and more obsessed,” says James. “I’ve gone back to university to study agriculture, and we’re growing the herd. We’ve got three cows now, and we’ll have at least four in September. We're just exploring other options for building the herd and securing additional land so that we can do that. The 18 acres at home acts as a base, and then we’re looking to get small plots of even quite big patches of ground, as locally as possible, and as rough and as mixed as we can get.”

The benefits of community spirit

While there aren’t many other farmers nearby using mob grazing principles, James and Nikki say Soil Association Scotland’s mob grazing field lab has been a huge source of support. “The field lab and the community around mob grazing has been so welcoming and supportive,” says Nikki. “Absolutely phenomenal.”

The field lab is made up of 16 farmers and crofters who are mob grazing cattle across Scotland. It’s designed as a peer-to-peer learning group, through which members can share best practice and learn from each other’s challenges. James and Nikki joined in 2019 and have found it invaluable.

"If there's 16 people in the field lab, it gives you an opportunity to learn the lessons of 16 mistakes but only make one yourself, which is brilliant” says Nikki. “We’re all learning from each other. There’s a sense of community, where you can ask about problems you have, or things you’re thinking about trying and hear views from the whole group." This has included sharing ideas on mobile water trough design, sharing photos of grass recovery and grazing plan decision making. 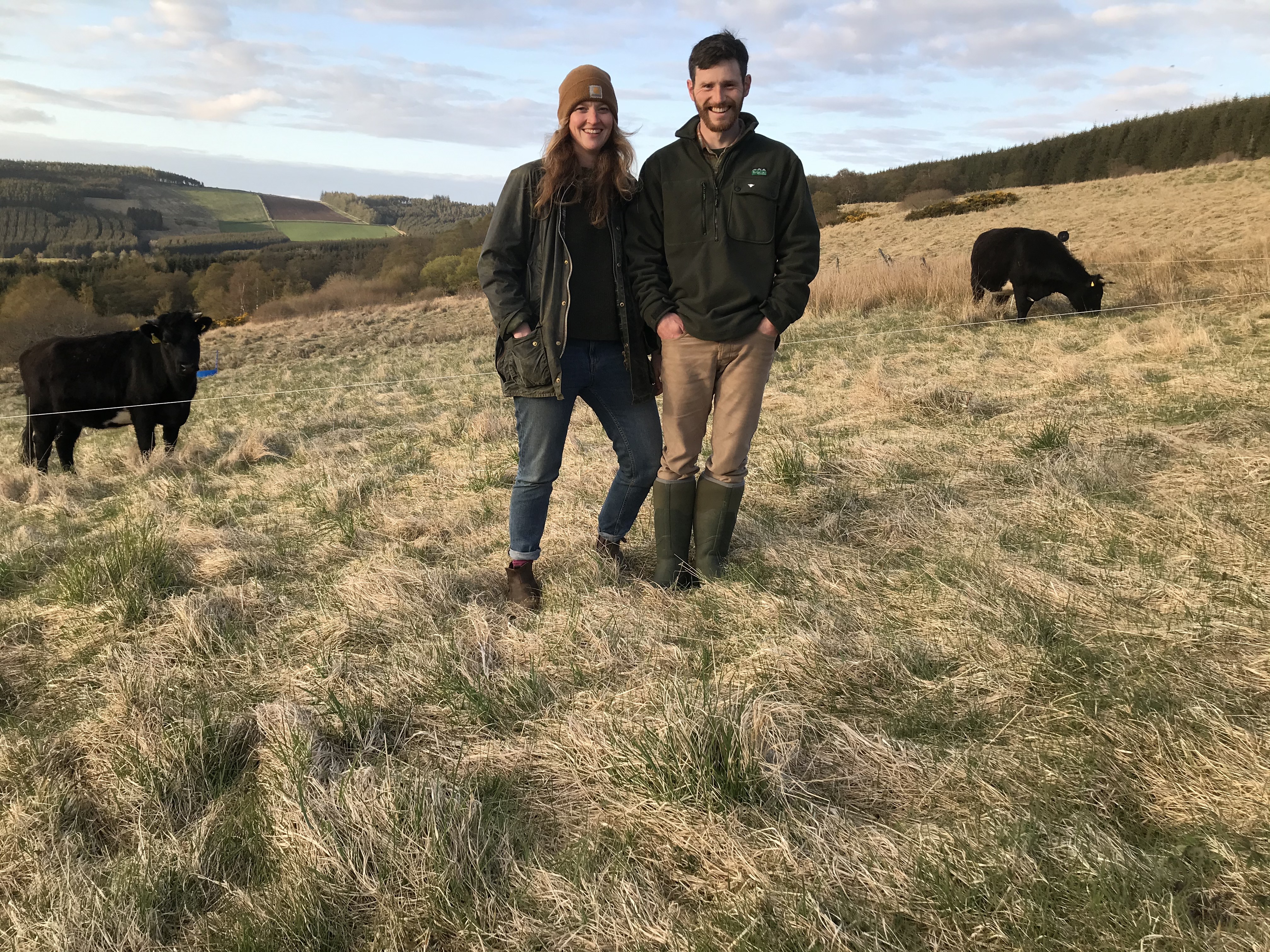 Picture: The Yoxalls use a mob grazing system combined with agroforestry, which allowed them to successfully outwinter their cattle. CREDIT: James and Nikki Yoxall.

Grazing the herd through the trees

James and Nikki have had some successes combining mob grazing and agroforestry. Their land includes a 15-year-old woodland of native broadleaf and conifer. They’ve found that they can successfully graze their cattle all the way through the trees. “One of the great things about mob grazing is you can be really flexible with your paddocks,” says Nikki. “It was just really lovely to see the cows in the woods and they’ve naturally lifted the canopy, too. They've kind of nibbled their way through the lower branches, helping us to manage the understory. The amount of wildlife and stuff that we're seeing and the different plants coming through is just beautiful.”

Grazing through the trees allowed James and Nikki to outwinter the cows last. “When the snow came and we had these really awful storms, we just changed the paddocks so that they could get right in under the conifers,” says Nikki. “We saw their natural behaviour really coming out. They knew where to go. They knew where to be sheltered. They knew to eat the different trees when they needed them. The integration of agroforestry and mob grazing has been a real success.”

Like the rest of the UK, James and Nikki have been at home much more during the coronavirus lockdown. This has meant more time with the cows, and more time to focus on their new grazing business, Grampian Graziers. They’re looking at opportunities to graze other peoples’ land, negating the need for owning a big land holding themselves. “We realised we would be better off grazing other people’s ground. We’re using our land as a base and then working out of other areas. The lockdown has given us the opportunity to set that up formally. And from here, we’ll be networking, working on some case studies and building relationships and trust.”

For James and Nikki, as new entrants to farming, being part of a supportive group like the mob grazing field lab has given them the confidence to try new things and move forward. They say one of the main benefits of the group is that members approach it from a knowledge-sharing point of view. “It's a community that wants to share things,” adds James. “We all want to see better soil health for wildlife and better wellbeing for people. It’s that thinking that makes the group such a positive thing to be a part of.”

Find out more about James and Nikki Yoxall at www.grampiangraziers.co.uk