Soil Association Scotland spent the early part of this year hosting a series of in-person workshops, talking to farmers and crofters about why a transition to agroecology requires a shift in mindset.

We know that this is already happening at farm level in Scotland – with many great examples of nature-friendly farming inspiring others to make positive changes.

But farmers and crofters also need to be encouraged and supported by Scottish Government policy to reduce inputs, increase biodiversity, improve soil health and integrate more trees into their systems – all while continuing to produce high quality food and maintaining profitable businesses.

We have now taken our message directly to the Scottish Parliament, with a two-day exhibition and linked evening reception on A Transition to Agroecology in Scotland. 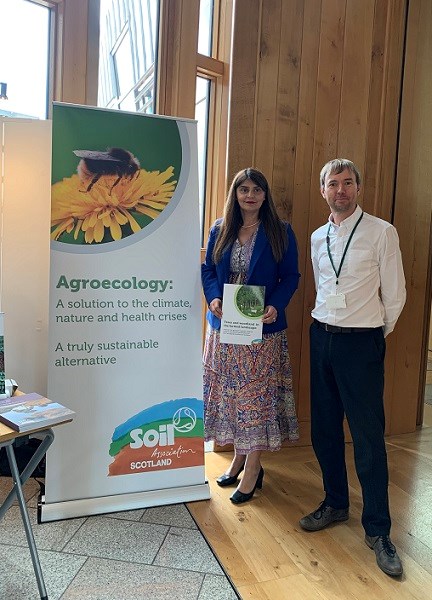 The exhibition, located outside the main debating chamber in Holyrood, provided a fantastic opportunity for direct engagement with policy makers.

We were delighted with the response from government ministers and MSPs from all parties, representing rural constituencies as well as urban seats. 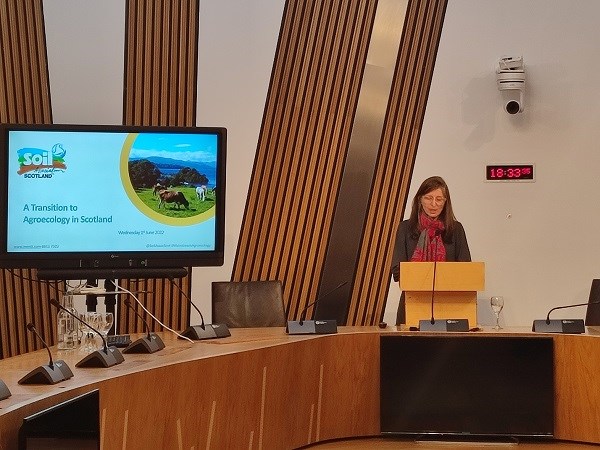 We had the time to outline some of the key projects we are working on – from knowledge exchange on agroforestry to our campaign raising awareness of the impact of Ultra-Processed Food.

We also showcased reports from the SEFARI fellowship on the adoption of agroecological principles in Scottish farming and the Food, Farming and Countryside Commission’s Farming for Change work.

And those conversations were continued in the evening reception, with the guests including five members of the parliament’s Rural Affairs, Islands and Natural Environment Committee, as well as government civil servants, academics and representatives from key stakeholder and industry bodies.

Putting farmers in the driving seat

We believe that the people best placed to explain why the transition to agroecology should take place are the farmers and crofters who are already putting this theory into practice. 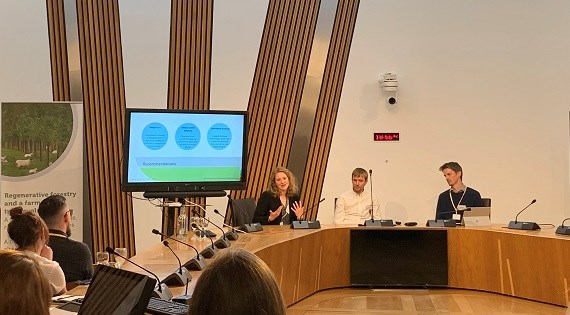 It was great to hear the individual stories of what took each farmer and crofter down the agroecological path.

One recurring theme throughout was that the economics of agroecology do stack up – alongside the benefits for animal health/welfare, biodiversity, soil health and resilience in the face of a changing climate.

This was true at a large scale for Johnnie and the team at Balbirnie, down to the small-scale for Nikki in Aberdeenshire and Phil in Skye. And through his story of direct sales to his local council, Bryce was able to illustrate the huge potential of the government using public procurement as a way of increasing demand for organic and agroecological produce.

Making the case for agroforestry

The reception also provided an opportunity to launch our new policy briefing on the economics of agroforestry, Trees and Woodland in the Farmed Landscape.

This report built on the economic modelling that Soil Association has worked on with Cumulus Consultants in England, with a 25-year scenario for Scotland looking at four main farm types in Scotland, upland grazing, lowland grazing, dairy and arable.

It found that a modest amount of tree planting (1–5%) could deliver 342,000ha of new farm woodland and in-field agroforestry. That figure was broken down to 269,822ha of woodland and 72,617ha of in-field planting – which is an important distinction because at the moment, trees planted to lower density (e.g. in silvoarable or silvopastoral systems) would not count towards Scottish Government tree planting targets. We argue this needs to change, with a stand-alone target for tree canopy cover for those trees planted outwith woodland. If that happens, and the government maintains its 18,000ha per year tree planting target up to 2050, then this farmer-led tree planting would account for more than two thirds of that projected total.

Achieving this will require financial support, particularly for the initial establishment stage. Our model suggested the overall impact on net farm income would be £100m per annum that could be met by a blend of public and private financing. We think this figure is realistic in the context of an annual Scottish Government agriculture budget of £600m, in addition to the £150m announced this year alone to ‘accelerate’ progress towards tree planting targets.

We are delighted to be working alongside other fantastic organisations that are making the case for agroecology in Scotland – many of whom were represented at the event, including the Food, Farming and Countryside Commission, Pasture for Life, Nature Friendly Farming Network, Land Workers Alliance, Propagate and Nourish Scotland.

As we continue to seek to influence the policy landscape in Scotland, we feel it is important to tackle head-on the challenge of whether this all stacks up financially.

This event was the first step in that process. Watch this space for more evidence-based examples of why a transition to agroecology makes sense from a business perspective – as well as from an environmental standpoint.