Soil and the power of poo

Soil and the power of poo

‘Give me five more minutes’ signals Gualu Goud as he’s standing on top of one of his five compost heaps working the top layer with a hoe. I met Gualu earlier this month in a village in the eastern Indian state of Odisha (formerly Orissa). He’s been a cotton farmer for most of his life. Things were ok until about 10 years ago when yields started to drop even though he used increasing amounts of expensive chemical fertilisers. And looking at his soil he felt really bad, there was no life in it, he says.

In 2007 agricultural advisers from Chetna Organic, an Indian NGO that promotes sustainable farming methods in what’s known as India’s cotton belt came to his village and offered advice and training – like how to make good compost and use it to heal the soil. Just six years later half of the 130 farmers in Bhimdanga village are farming organically, cotton and other crop yields are good, and Gualu has become an expert compost maker.

As he describes how he alternates layers of vegetable matter and manure mixed with straw I am reminded of the man who perfected the traditional art of compost making in India at the beginning of the 20th century: the farmer and scientist Sir Albert Howard. He graduated from Cambridge and worked in the West Indies before he came to India where he worked in several research stations. He learned from his ‘new professors – the peasants and the pests’ and realised that plants would only flourish in healthy soil. ‘As soon as land drops below par, disease may set in’.

Howard then looked at what defines a ‘healthy soil’ and the interaction with the plant. While the leaves of a plant through photosynthesis convert inorganic components into organic compounds and plant growth, the opposite happens in the soil: ‘Organic matter is continuously reverting to the inorganic state (...) nitrates are one form of the outcome. It is the business of the root hairs to absorb theses substances from the soil solution and to pass them into the sap, so that the new life-building process can start up again.’

And Howard was among the first to write about the interaction between the root hairs of a plant and fine fungous threads which ‘invade the cells of the root. (...) The marriage of a fertile soil and the (plant) it nourishes is thus arranged.’ The symbiosis between root hairs and fungi is called the mycorrhiza – and it was one of the hot topics of the Soil Association’s National Soil Symposium last November. One speaker called it the ‘soil internet’ that limits the access of pathogens to the roots and acts as a ‘health insurance’ for the plant.

In making compost by mixing plant with animal matter like manure or horn shavings and creating a good environment for microorganisms, fungi and earthworms, Howard mimicked ‘the methods by which Nature makes humus’.

Maybe it’s not surprising that Howard’s insights into soil health didn’t go down well in Europe and in the US – his farming methods can still put the whole agrochemical industry out of business: like Gualu Goud, the cotton farmer in Odisha, more and more conventional farmers and growers realise that increasing the amount of fertiliser year by year doesn’t restore fertility in their soil but deplete it further.

2015 is the International Year of Soils. Picking up one of Albert Howard’s books might be a good start – all quotes come from his book ‘Farming & Gardening For Health Or Disease’, republished by the Soil Association in 2006.

Or maybe Gualu Gouds insights will do. Since he’s become an organic farmer he saves lots of money because he doesn’t need to buy fertiliser and chemicals. His yields are higher than ever before and he really enjoys the vegetables his wife grows. ‘Since we’ve gone organic they just taste so much better’, he grins ‘the only problem is I want to eat more’.

What does the National Food Strategy say? 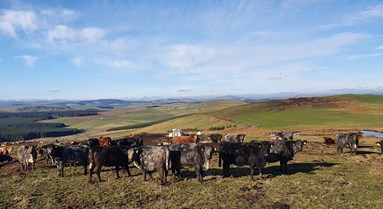 The benefits of feeding cows grass over grains