More poison in the fields and our food

More poison in the fields and our food

Earlier this year the IARC, the World Health Organisation’s cancer research agency, classified glyphosate, the most widely used weed killer in the world (best know as the Roundup brand), as ‘probably carcinogenic’. This month they put another weed killer, 2,4-D, in the ‘possibly carcinogenic’ category. Why that matters becomes clear when you realise that 2,4-D is known to be very similar to an active ingredient in the leaf stripping chemical ‘Agent Orange’ used during the Vietnam War. The chemical company Dow AgroScience has now produced a weed killer US farmers growing GM corn and soy have been waiting for desperately: under the brand name 'Enlist Duo' Dow it has combined glyphosate with 2,4-D. US farmers battling with more and more herbicide resistant super weeds are hoping that the new poison combination will help to keep these weeds at bay – at least for a while, i.e. until they, too, will develop resistance. In autumn last year the US Environmental Protection Agency, EPA, approved the use of the glyphosate/2,4-D weed killer combo for use in six states, in April 10 more were added to the list. 2.4-D can now be used during the growing season – this is the important change – in all key farming states from Arkansas to Wisconsin.

Why should that matter, you may say, with very few exceptions GM crops cannot be grown in the EU. Unfortunately that doesn’t mean that no food containing them will end up on your plate: European farmers import a lot of livestock feed and most of what they get from the US and countries like Brazil will be GM soy and corn. So the steak on your plate quite possibly comes from cattle raised on or at least finished with GM feed. Particularly in Germany there has been a lot of consumer pressure to end this practice. The campaign has scored at least one success: at the end of last year Wiesenhof, a major chicken producer, announced a switch to non-GM feed.

It doesn’t really matter to me, you may think, perhaps you only eat organically produced food (that really would be fab!) or you are a vegetarian. Well, you may be surprised: the Enlist Duo herbicide containing 2,4-D is a serious threat not just to organic agriculture, it’s a threat to any plant that is not genetically made to be resistant to it. I learnt about 2,4-D from Theresa Podoll. She and her husband run a small but award winning seed farm in North Dakota. ‘Until the nineties, agriculture in North Dakota was really varied’, says Theresa, ‘people grew barley, oats, flax, wheat, rye and sunflowers – and then GM crops came along. Now there is nothing but GM corn and GM soy’. The Podolls already have problems with glyphosate drift, they depend on their neighbours to check the wind direction before they spray their fields with herbicides –GM corn, GM soy (and superweeds) survive such a spraying - the vegetables the Podolls grow for seed don’t. ‘Glyphosate drifts with the wind’, says Theresa ‘if the farmers are careful to spray on days when the wind does not come our way, we are relatively safe’. But with 2.4-D it’s different. Chemically it’s an ester, it’s fleeting and forms a poisonous cloud that can drift with the wind for two days or longer. ‘If GM corn and soy are approved that are resistant to this stuff we stand no chance to grow organic seeds here anymore’, Theresa said at the time. In April North Dakota was among the list of states in which Enlist Duo can now be used.

The Podoll’s fear that they might have to give up farming is very justified: farmers in the US already are allowed to use 2,4-D (and a similar chemical called Dicamba) for what is called ‘spring burn’ - an attempt to clear the fields of any weeds before getting fresh seeds into the ground. ‘In particular, vineyards are already seeing the consequences’, says Theresa, ‘in 2013 sixty out of sixty-five vineyards in Ohio have reported damage caused by 2,4-D and Dicamba’.A US trade journal for grape growers estimates the damage to vineyards in Nebraska amounted to $1 million last year. - As vine is a perennial, 2,4-D can affect the new green shoots that have just started to come out at the time of the ‘spring burn.’ The key change which now allows farmers to apply 2,4-D throughout the year, including the whole growing season will affect all annual crops, too.

Because 2,4-D and Dicamba drift with the wind, it is impossible for vineyards or vegetable growers like the Podolls to know who caused the damage and hold them accountable. Theresa cited a study done at Ohio State University in which losses of between 17% and 57% are predicted. And once some farmers in our region switch to Enlist Duo GM crops, argues Theresa, everybody else will have to follow suit because these will be the only plants not at risk.

Even if the EU were to stay mostly GM free, via animal feed imports 2,4-D is likely to end on your plate nevertheless. And for the US growing anything organic has just become that much harder. 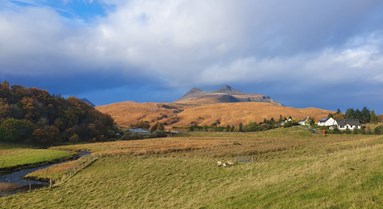 How crofting supports the environment and brings communities together