The Beginning Of The End For Glyphosate?

The European Parliament just voted to re-authorise glyphosate, but with significant restrictions on its use.

So what does the vote mean for the world's biggest selling herbicide? And how come the UK's National Farmers' Union welcomed the decision as an unqualified victory?

If glyphosate is unsafe for people to be exposed to in parks, playgrounds and streets, then it's hard to see how it can continue to be used as an agricultural pesticide, where both farmworkers and rural residents are at even greater risk.

The European Parliament voted in favour of re-authorising the use of glyphosate - but crucially, qualified this approval with a number of significant restrictions.

Glyphosate is the world's most widely sold weed-killer - most commonly sold as Monsanto's Roundup. For decades it has been claimed to be completely safe by the pesticide industry and its supporters.

But there's a growing body of evidence of the dangers of glyphosate, beginning with the IARC's warning that it is a probable human carcinogen. The Soil Association believes it should be banned altogether.

From a UK perspective, the most significant aspect of the European Parliament's advisory vote on glyphosate reauthorisation is the call"for restrictions on use in agricultural fields shortly before harvesting", saying the currently allowed practice of spraying glyphosate on wheat and other crops before harvest is "unacceptable".

Since last year, our 'Not in my Bread' campaign has called for a UK ban on the use of glyphosate as a pre-harvest weed-killer and as a desiccant to allow faster harvesting. Spraying a probable carcinogen on food crops to kill them so they can be harvested faster sounds ridiculous, but it's happening all across the UK on the wheat that makes our bread, flour and other food like biscuits and cereals.

In the last year for which government figures are available, nearly a third of UK cereals, like wheat, barley, oats and rye, were sprayed with glyphosate - a total of just over one million hectares.

Huge setback for pesticide claimed to be the 'safest ever'

Just a few months ago everyone assumed that glyphosate would sail through re-authorisation in the EU without any problems. The decisions by the European Parliament are a dramatic blow, not just to the future use of glyphosate but to the pesticide industry generally. MEPs even proposed halving the extension of the license called for by the pesticide industry from 15 years to seven.

Globally, the most significant moves were the call for "full disclosure of the scientific evidence behind an assessment of glyphosate by the European Food Safety Authority (EFSA)" - overturning over 50 years of unpublished, industry funded studies being used in secret to get pesticides authorised in countries like the UK.

Full disclosure of almost all scientific evidence is already a requirement for medicines - but it's not for pesticides and it's not for GM crops. If the European Parliament's recommendation is implemented, it would open up what's been a secret, industry-dominated process to scientific, public and political scrutiny for the first time.

In March last year, an independent team of scientists from the World Health Organisation's International Agency for Research on Cancer (IARC) concluded that"glyphosate is probably carcinogenic to humans".

In contrast, in November 2015 the European Food Safety Agency (EFSA) concluded that it was safe to use - but given that this review of glyphosate relied in part on industry funded, unpublished studies, the public, and many European politicians no longer trust the EFSA's judgement.

This significant inconsistency between these two organisations spurred 96 prominent scientists from 25 countries to voice strong opposition to the EFSA report.

The reason that other eminent international scientists advising the WHO have already come to different conclusions is, as the EFSA themselves admit, partly because the WHO scientists are considering publicly available, peer-reviewed scientific evidence, and notsecret industry studies. The WHO looked at glyphosate acting alone, and at the impacts of glyphosate as it is actually used. They found the cancer risk for both.

Although glyphosate is always used in combination with a range of other often toxic chemicals, and although researchers have found that glyphosate mixes as sold to farmers and gardeners can be up to 1,000 times more toxic than glyphosate acting on its own, EFSA insists on only looking at the impact of glyphosate alone.

It is blindingly obvious that the WHO approach is right from the perspective of public safety, and that the EFSA approach simply serves the interests of the pesticide companies.

This extraordinary argument is between two very different international teams of scientists - the IARC committee who are all named, all independent and have no vested interest in the chemical industry, and EFSA team who are nearly all anonymous, while we have no idea what connections they have to the industry.

This argument has, for the first time for more than 50 years, opened up how pesticides are regulated to scientific, political and public scrutiny - and what we are seeing doesn't look good.

In a dramatic move which will give heart to local campaigners all over the world, the European Parliament said that there should be a total ban the use of glyphosate in public spaces. This would mean no more glyphosate-based herbicides in private and public green areas, including public parks, streets, playgrounds and gardens.

This is a particularly positive result as Monsanto has been actively trying to stop local authorities and town councils across the world from banning the use of Roundup. Monsanto knows that if glyphosate has a reputation as unsafe for people to be exposed to in parks, playgrounds and streets, then it's hard to see how it can continue to be used as an agricultural pesticide, where both farm workers and rural residents are at even greater risk.

This week's vote saw 374 MEPs supporting the resolution only to authorise glyphosate with these significant qualifications, with 225 against and 102 abstaining, according to the European Parliament Committee on Environment.

So how come the NFU chose to welcome the vote as "positive for agriculture"? Maybe they were simply relieved that MEPs did not reject reauthorisation altogether. Maybe they were trying to mislead the public - and their own members - about the scale of the setback for glyphosate that this vote actually is.

No doubt they are hoping that the main restriction MEPs want to impose on farmers' use of glyphosate - the ban on pre-harvest application to crops - will be dropped by ministers at the final hurdle. Or just maybe, if their press release is to be believed, the NFU really are happy to accept that restriction, recognising its benefits for consumers and the safety and good reputation of Europe's food - in which case we should be glad of their support.

A number of EU member states like France remain opposed to any relicensing of glyphosate, while others like the UK are all for it, so the future will likely involve a compromise.

It is now crucial that the EU's member states at the Council of Ministers include in any reauthorisation all the major demands set down by the EU Parliament this week - whether the NFU really does support them or not!

Join the Soil Association's 'Not in Our Bread' campaign to get a permanent ban on pre-harvest use of glyphosate.

This blog originally appeared in The Ecologist and was reproduced with permission. 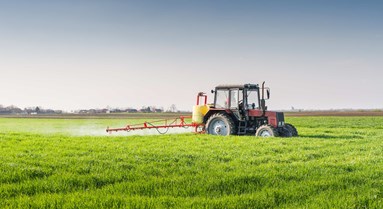