Sitting out back on the last sunny Sunday afternoon in May all I wanted was another cup of coffee. It must have been the low frequency hum that made me look towards the back of the garden – and there they were, bees swirling around in their thousands, forming a funnel above the hive, then spreading out into a kind of bee cloud. 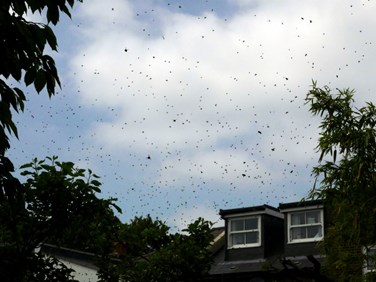 ‘They are swarming’, said my husband, Martin, with equal measures of excitement and trepidation in his voice. He’s been keeping bees for three years now, but this would be the first swarm he’d attempt to catch and rehouse. The bees had by now formed a dense, swirling cloud that was slowly moving westwards across the neighbouring gardens at a height of about four meters. While Martin changed into his bee suit and grabbed his camera, I watched the bee cloud from the upstairs window. Swarming bees travel between 30m and 100m before they settle and have just a few scout bees look for suitable accommodation. These ladies, as bees are referred to in our household, felt that three doors down would do. The cloud decreased in size and became denser while slowly descending. Armed with a bed sheet and an old wine carton (organic, of course!) Martin went over to our unsuspecting neighbours who were enjoying a late lunch and had no idea that part of their garden had become foreign occupied. 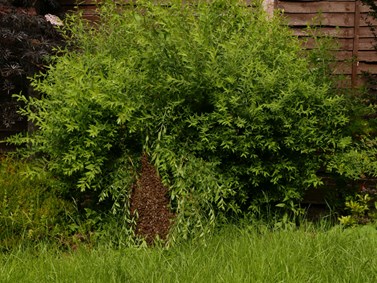 The bees had settled on the lower branches of a bush which were sagging under their weight. It’s not surprising that swarming bees initially don’t fly far. They have eaten as much honey as their bodies can hold, they can’t even extend their sting because it’s wedged in place by all the food. Even so, they have only 72 hours to find a permanent shelter – a hollowed out tree, an attic, or, with a little bit of help from a bee keeper, a hive box. If they don’t find anything suitable during that period they run out of energy to fly and will die. ‘Our’ bees have taken all of twenty minutes to cluster around their queen and prepare for the scouts to set off. All Martin needs to do is to shake them into the box. Easier said than done... A white sheet carefully slipped under the branch helps to get the stragglers and scouts into the box too. With the now buzzing box sitting on top of the sheet its white colour contrasts nicely with the enticing, dark box entrance, almost like a huge billboard saying: save housing available right ahead. 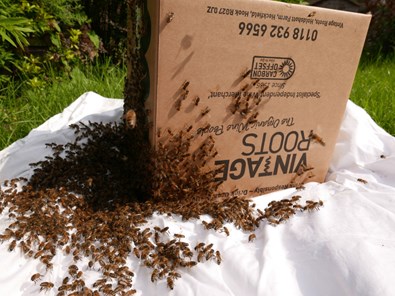 Once those already in the box start signalling that it’s good place to be, the rest of the bees scramble to get there as fast as they can. Whether the bees in the box give the ‘all clear’ to those still outside depends on the queen. If she is among the bees that got shaken into the box the swarm will congregate around her. 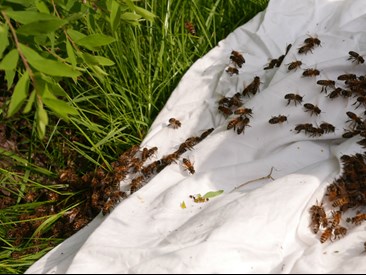 For a smooth move from the box into an empty hive at the back of our garden Martin, with a few slats and some more cardboard, builds a little ramp. Back in our neighbour’s garden he waits until the last bees have disappeared in the box, then he carefully wraps it into the sheet and carries it back. To open the door and see someone in a full bee suit with a buzzing bed sheet under his arm is a sight to behold... At the back end of our garden the swarm collection procedure goes into reverse. The bees are carefully shaken onto the ramp and the box is placed upside down on the white sheet to help the stragglers still clinging on inside to leave, too. It takes only minutes until the bee scouts have discovered that there is luxury bee mansion up for the taking: dark, warm, smelling of the bees that lived there before. The news spreads fast. Several bees sit on the outside of the hive with their butts in the air, emitting pheromones signalling something like: ladies, this is our new home, please make your way to the entrance at the bottom right hand corner. After that the bees don’t walk in, it looks as if someone has switched on a vacuum cleaner inside, sucking the bees in.

Once the queen is in, she will start laying eggs as soon as the worker bees have managed to produce the first comb. Our bees are kept ‘naturally’, which means we are happy for their pollination services (as are the neighbours who all have seen a better crop of raspberries, apples and other fruit), we do not take any honey in autumn. If Martin harvests honey he does so in spring during what’s called the ‘nectar flow’, when there is plenty of forage around and the bees have no problem filling up their stores again. 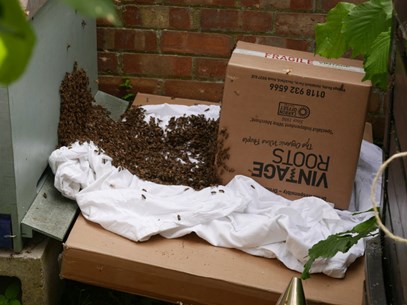 The last bees are entering the hive. The whole process, from the swarm forming to being resettled has taken just under three hours: with the move complete a new bee colony is born. In the late afternoon bees are hovering outside the new hive, exploring the immediate surroundings. Just a few feet away is the old hive, the one they left just hours earlier. Here life is going on as usual with bees coming and going, bringing in nectar and pollen. But inside things have changed dramatically: thousands of experienced bees have departed with the old queen. What remains are about half of the worker bees and some queen cells. It will take another few weeks until the first new queen hatches. Her first move will be to kill any royal sisters still developing in their cells. Then she gets ready to go on her maiden flight to a mating place where drones congregate from a radius of up to 60 km.

In the hive next door the new colony is getting room service... with the weather turning cold and rainy on Bank Holiday Monday, Martin decided to supply the ladies with a bucket of (organic) sugar water. But for the last few days it’s been sunny and warm again, the bees in both hives have been foraging from morning to night. And the raspberries are carrying more fruit than ever.