"Because of what we’ve learned we are already discussing the planning of new orchards with greater attention to preparing the soil." says Paul Smith of Loddingtons on the benefits of taking part in the GREATsoils project.

I’ve been interested in soils since school age. I grew up on the farm and we had some old soil maps of the farms which were great to look at (I still have them) which provided the starting point for understanding how what’s below is affecting what’s on top.

More recently we have experienced many challenges with establishing and maintaining productivity in our new orchards. It is clear that soil plays a fundamental role in the future health of our whole business – starting with the trees – and I wanted to improve my understanding of our soils; their condition; and things we might do to improve them over time.

By taking part in the GREATsoils field trial I would like to learn more about the impact of our activities on our soils and some tools to improve our management over time. We have some soils with very poor natural drainage and it would be a great benefit to substantiate the use of cover crops to bolster organic matter and effect physical changes to the soil profile through the root systems of the plants as well as encouraging more earthworms and their tunnels. To measure this we are using the NRM Soil Health Suite and earthworm counts and will also be looking at things like infiltration rate of the soils before, during and after the trial.

The use of cover crops in perennial crops is not well documented. It is certainly not well practised to my knowledge. From the use of cover crops in min till agriculture it seems to me that there is a huge amount to be learned and gained from these trials. The insect activity in our orchards where we have sown cover crops is incredible. We have seen substantially higher numbers of ladybirds and hoverflies and so on. These predatory insects are great for controlling aphids and other pest species and are a key part of our Integrated Pest Management strategy. 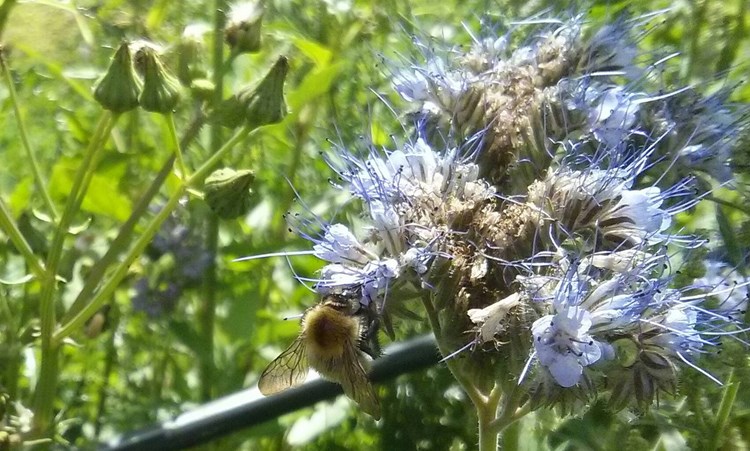 "The insect activity in our orchards where we have sown cover crops is incredible." says Paul Smith.

Its early days yet but already we have felt more encouraged to couple the basics of digging with a spade and feeling the soil in our hands with more advanced analyses through the NRM suite. I am looking forward to learning more about the various measures and their information as time goes on.

Through being involved with GREATsoils I have already learned that I have neglected to bring the full focus of my management on our soils. Weaker rootstocks have been like a litmus paper for the soils. You can see where the soils change in the orchard more clearly now. Historically with stronger rootstocks these changes were not so apparent. I also know a great deal more than I did about earthworms.

Because of what we’ve learned we are already discussing the planning of new orchards with greater attention to preparing the soil. We will be using green manures to increase organic matter and to break up compacted areas. In established orchards we are actively planting different seed mixes in the alleyways to encourage pollinators and predators.

This year we did not need to use any chemical or physical controls for pear sucker in two young pear orchards where we have planted clover, vetch, borage and phacelia. The predator populations in both orchards are very high. It is hard to say if this is specifically down to the planting of the cover crops in the orchard but we are very encouraged.

It has been great to get involved in this trial. The workshops were very good and led onto us becoming a trial site. I am really looking forward to carrying on the work and I hope we will derive some practical and useful knowledge from our endeavours.

Growing Resilient Efficient and Thriving GREATsoils is being delivered in partnership by the Soil Association, Organic Research Centre and Earthcare Technical Ltd. The project is part of the GREATsoils programme funded by AHDB.

Paul was born and raised on a fruit farm in Kent and spent his school holidays picking and packing apples or pruning the trees. He studied Environmental Science at Plymouth University including a year studying at Guelph University in Ontario Canada. From 2000 Paul worked in Local Government in Public Rights of way and Urban Regeneration before returning to the farm business in 2008 to work alongside his brother. They now farm 70 hectares producing apples, pears, cherries, and apricots for the UK supermarkets.