When Rebel Kitchen took a good look at their coconut water production they noticed that they might be missing a trick, and that they had the opportunity to really make a difference to sustainability and food waste in the process.

Here’s where the bright idea comes in – Rebel Kitchen started using the meat of young green coconuts to make their yogurts. And they didn’t stop there, they also worked out a way to use the coconut husks to help to fuel their plant in the Philippines as a renewable energy source. 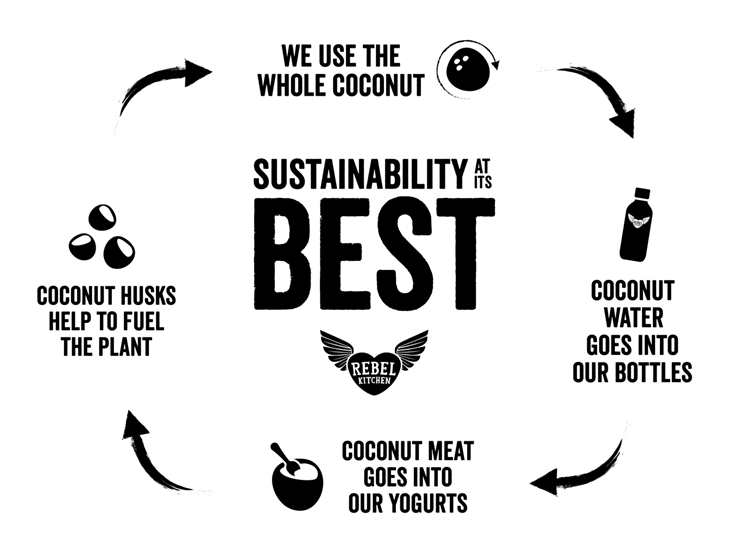 By using the meat as the base, a first for the industry, the yogurts are a good source of potassium plus everybody’s best friend – fibre. It also means they are lower in fat than conventional coconut yogurts but still give that satisfying creamy hit.

The amount of love and energy put into carefully harvesting these coconuts is inspiring. All hand checked in the tree to make sure only the ready ones are picked, the coconuts are gently lowered by rope to prevent damaging them. The farmer employs around 20 men to climb and harvest – where jobs in the countryside are scarce.

Since going organic, this farmer has seen a price increase for the nuts he harvests. Another local farmer who also grows our coconuts has intercropping in full force. This is where the land isn’t just used for one crop but several are woven into the land. This helps with preventing soil degradation, increases biodiversity, can help with pest management and supports the farmers to have a variety of crops to go to market with, hedging the risk of only growing one crop.

Every ingredient has an impact on the planet, but Rebel are conscious that food manufacturers must be part of the solution to getting the system working more fairly and healthily for both people and planet.

If that's given you a taste for coconuts; find out where to grab yourself a pot.