Adrian Hares has been farming organically at Round Hill Farm in Wiltshire since 2001. His farm comprises of 330 acres of beef cattle and combinable crops, including – wheat, beans, barley, oats, grown in a rotation with clover leys.

Taking a break from feeding his cattle, Adrian shared his wealth of knowledge on soil and organic amendments. 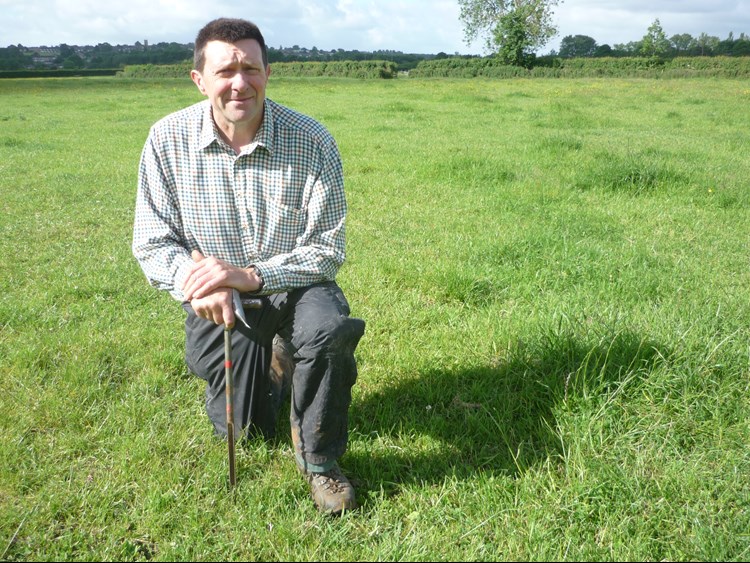 Where does your interest in soil come from?

My interest in soils is both as a practical farmer on, what is difficult land - clay and heavy clay loams, and also from a professional point of view. In 2001, I diversified my businesses by starting to provide soils advice as an agent for Courtyard Agriculture. To this end, I became qualified with FACTS, and BASIS Soil and Water certificate.

The variation and permutations in terms of depth, texture, stone and drainage means that soil is a highly variable commodity – much more than many farmers realise. If the physics alters, then to my mind it must have an impact on the biology. How we treat the soil effects the amount of moisture and air in it at any given time, hence different soils providing a variety of habitats for bugs and other wildlife.

I thought that it would be very interesting to do a study to find more out about the biology of the soils in our area, North Wiltshire and South Gloustershire.

Is this what you’re focusing on in your Innovative Farmers Lab?

What we did first off, as a group, was a survey – with a whole range of soil types. We then decided to try and do an intervention – it was either phosphate or organic matter amendments. Because the balance of the numbers involved we went for phosphate. Phosphate availability is a big issue for all farmers, especially for organic and those on heavy land like me, so I thought it would be interesting to see what we can do to make this valuable nutrient more available.

Soil biology is still an important part of the trial, since soil phosphate is made available by microbes, earthworm activity, and so on.

Can you tell us how you’re planning to raise the level of phosphate in the soil?

We’re co-composting rock phosphate with manure, or mixing it with other variables – like green waste compost and aerobic digester solid.  Research institutes generally carry out agronomy research on medium soils. It’s seldom that they go out to the heavy, awkward soil, as research institutes don’t like battling with these unruly conditions. So, we thought we’d go out into the real farm situation and try some things on difficult soils to see what the impact might be.

The trial will be running for three years, and although we’ve just finished the first year, I wouldn’t expect any changes yet as it takes time for changes to take effect.

What effects will you be monitoring?

The main variable that we’ll be looking at is phosphate availability but at the end of the trial we’ll see if there are any effects on biology, pH, organic matter or anything else. Because it’s a trial, we’re fully aware not all the variables are controlled across four fields and three farms. Instead we’re just doing comparisons within each farm to see what the major trends are.

Can you tell us a bit about your experience with organic amendments?

We have been quite traditional in approach so far, but we’ve been bringing in anaerobic digestate for the last two or three years and mixing it with farm yard manure on occasions.

In the past, we have also successfully used anaerobic digestate liquid as a liquid fertiliser on milling wheat to raise the grain protein.

Have you looked at ways to increase your soil organic matter?

Soil organic matter is a very interesting topic, fullstop. For organic farmers, I think it’s just about returning as much matter as you can. The organic movement and conventional sector need to look honestly what they’re both doing.  That’s what’s interesting about Innovative Farmers: it’s an opportunity for both sectors to learn from each other.

Have you discussed ways to encourage soil biological activity?

As a general rule the best thing you can do to encourage biological activity is to avoid compaction, minimise tillage if possible and grow big crops - with big root systems , and return manures and crop waste into your system.