Digging the Dirt: A series of in-depth reports of farms which are reaping the benefits of investing in their soil, and how they've done it.

Lower Smite farm has been owned by the Wildlife Trust since 2001 and demonstrates how sensitive farming techniques can improve the agricultural landscape for wildlife. Caroline Corsie has managed the farm since 2008 and quickly started improving the farms soil health and enhancing the wildlife value of the farm, two factors she believes are closely linked.

Caroline has been experimenting since arriving at Lower Smite. With complex mixes of green manures she designs herself, with a high legume content and with wild flowers that support a broad range of pollinators and farmland birds. She has also used locally available green waste composts to improve soil health and fertility and imports farm yard manure from a neighbour who feeds their extensively reared beef with Lower Smite forage. 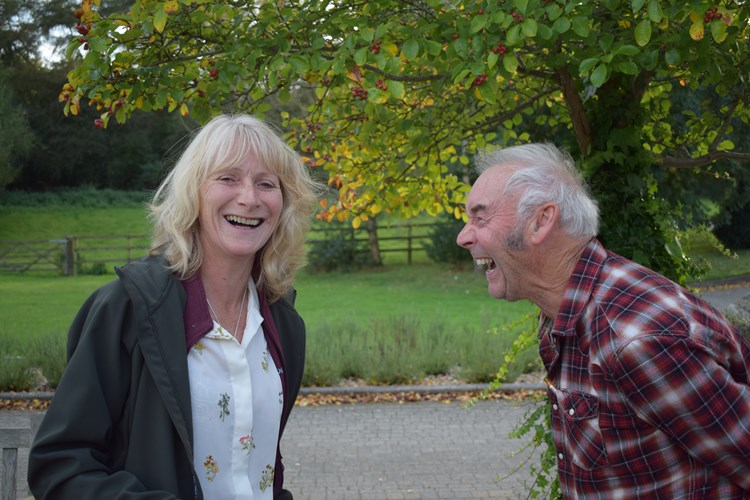 Production that balances the books

Before Caroline’s involvement Lower Smite was farmed as a non-organic arable farm. At best the farm was only on the edge of profitability. Caroline calculated at a feed price for the grain of £160 per tonne (t) she needed a yield of 8.5 t per hectare to break even but the yields were only achieving 7 t; a major reason for change. The farm also relied on a local farmer to do all the field operations with profits split 75:25 to the contractor’s advantage.

Since changing to an organic and more sustainable system Lower Smite is able to pay for itself. Organic wheat is grown that typically yields around 5 t per hectare. One tonne of this is used on the farm as wild bird feed, the remainder is sold. Winter bean is her other main crop with a small area of soft fruit and some grape vines. Caroline is currently seeking to supply local organic farmers in need of cereals and field beans for livestock. Caroline is planning to use companion planting in the wheat crop in the future using white clover, bird’s foot trefoil or Persian clover. 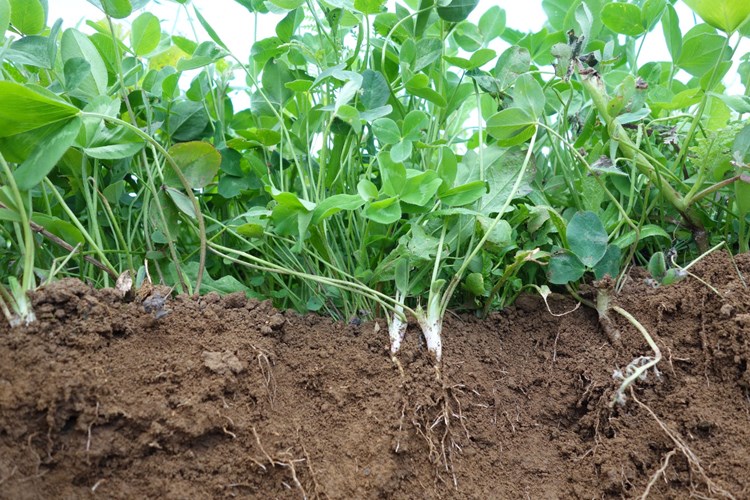 Seven Way of Investing in Soil

Caroline describes the farm as mixed arable with forage, but the lack of owned livestock has meant not enough farm yard manure is available to improve the soil organic matter. Initially she experimented with different mixes of green manures and cover crops that were cut and mulched back into the soil to lift the organic matter levels. Caroline estimates she needs a total of 8 years to get to the soil fertility her crops need. The cut and mulching was practised for a total of 5 years but now there is a greater reliance on livestock to graze the green manures and on the making of hay and silage with manure returned.

The rotation used at Lower Smite is typically 4 years of a diverse herbal leyfollowed by winter wheat or winter beans, with a changeover between fields of beans and wheat in the second year all followed by a spring crop under-sown with the 4 year ley again. Sheep are used to graze the winter growth of the wheat and since adopting this practice there has been no black grass problem.

Caroline uses green manure crops for several reasons. The seed mixes sown are selected to improve soil health and organic matter as well as providing pollen and nectar for insect pollinators and to support farmland birds.

Dominant pollinator plants such as Phacelia are commonly under sown with more complex mixes to last a for 4 years. This reduces the number of soil disturbances by cultivation equipment and prolongs the availability of both nectar and pollen. The Phacelia acts as a winter cover crop which is cut at the end of March to allow the rest of the plant species in the mix to grow on. Sowing dates have been typically June or August. Fields in HLS agreements for pollinator and bird options need to be established by April. An important part of the cropping plan is to provide flowering plants from January through to December helped by encouraging arable flora such as red dead nettle. 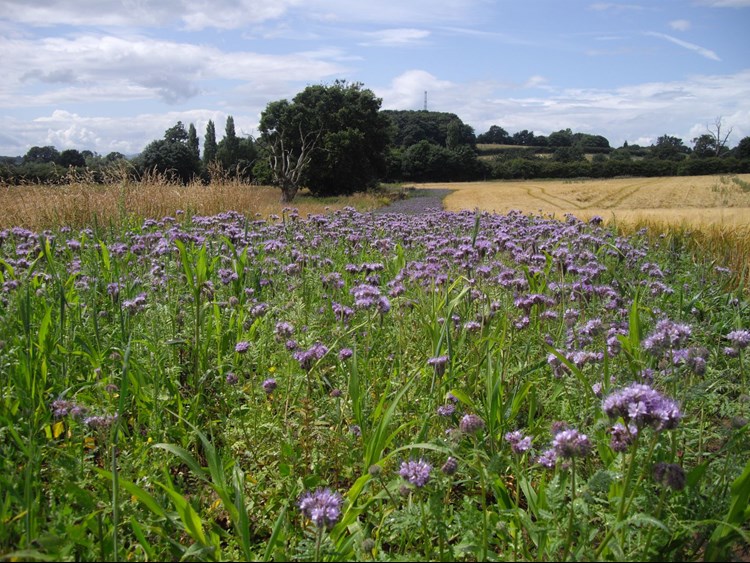 4. A market for Lucerne

The experimenting has continued with the growing of Lucerne which needs a good seed bed to get it started but then grows much better than visiting farmers anticipate - so much so a number have started growing it themselves! To help establish the Lucerne at Lower Smite, it is sown with a mix of clovers, including Persian, Crimson Red and White, and with Timothy and Fescue grasses (Appendix 3). If the crop is to be grazed with sheep White instead of Red clover is used. Although this mix is slow to get going in year 1, it will last for 4 years. The Lucerne is cut for hay when it flowers, typically June, and the mixed nature of the crop gives a better spread of cutting dates when compared to simple ryegrass leys. The resulting haylage is of excellent quality and is increasingly being sought and sold to neighbours with some exchanged for cattle manure. There is in particular good demand for the Lucerne hay from a local dairy farmer who likes to include it in his cow’s milking rations.

Caroline also uses an Environmental Stewardship herbal ley mix (provided by Cotswold Seeds), called EK21.This is sown in September and is very slow to establish with initially poor ground cover. However the following year it grows well and yields two cuts over the summer. This is fed to local cattle in exchange for the manure, which is spread back on the land at 12t per hectare. This mixture contains chicory which together with the deep rooting lucerne is very helpful in alleviating compaction that can arise through field operations with heavy machinery.

There is no need for lime as the soil maintains itself at a pH of 6.3; magnesium is also found in the soils at very high indices of around 6 and even 7-8 in some of the soils.

For the last two years the farm has used local non-organic sheep to graze the lucerne for the permitted 120 days each year. There has been an investment in fencing of £13 000, with some HLS support, which means 85% of the farm is now available for grazing.

Caroline is experimenting with shallow cultivating with discs rather than ploughing, particularly as she relies on contractors and therefore difficult to control ploughing depth. The operation to create a seed bed is to disc with a furrow press, allow weeds to germinate and then disc and press again 3 weeks later. Caroline believes this has helped control the couch problem in some of her fields. She will also use a 50% higher grass and clover seed rate to help crowd out couch grass.

A complete min-til operation is unlikely to be possible at Lower Smite farm as it is not possible to incorporate the 4 year old leys before sowing the wheat or field beans without ploughing or heavy discing.

Manure and green waste compost is spread at the same time as the second discing or is ploughed in typically when incorporating grass leys. Caroline has experimented with compost applications up to the maximum of 30 tonnes per hectare but availability restricts this. Loads are delivered at 15-20 tonnes but access is not possible to the entire farm. Typically compost is applied at 10t per hectare followed by 12-15 t of farm yard manure (FYM) per hectare. In the future Caroline would like to use a mix of compost, FYM and woodchip as a more ideal soil improver. The compost is applied particularly heavily on an area of land with a couch problem as it appears to be suppressing growth. The compost is also having a liming effect on the soil lifting pH values.

Caroline will use more of this compost than she can secure at present. There is a limited supply, except in the winter months and getting delivery to all parts of the farm is difficult  as well as finding space to store sufficient amounts before spreading.

Over the first 5 years of Caroline’s work she has lifted the organic matter content of her soil by 20%. Her baseline average over the farm when she started was 2.5% and it is now at 3%. But some of her fields have much higher OM measurements with one field of permanent pasture recorded at over 9%. When Caroline used green waste compost in 2011 on one field with an OM content of 3.2%, it raised the OM to 7.0% when measured again in 2012 and two years later in 2014 it was still at 5.4% with no further application of compost.

The starting figure of 2.5% organic matter across the farm is low but is typical of many of the arable soils in the UK and reflects the lack of grassland breaks or green manures in many arable rotations. The work undertaken by Caroline has shown that degraded soils can be improved but it takes time, resources and an openness to try new techniques. Lower Smite is an excellent example of what can be achieved and is a valuable resource for other farmers trying to improve their soils in Worcestershire.

"Shortly before coming to Lower Smite Farm, I read The Living Soil by Lady Eve Balfour. It reminded me of the importance of a functioning food web, from the birds right down to the tiniest creatures. When we started here our soil was impoverished and hungry, now it's thriving.

Paying attention to nature has taught me so much, in fact it's led us to opportunities to diversify. There are several rare arable flora species here, including the small flowered buttercup. It came here with the Romans and thrives in exactly the same conditions as vines. Spotting this small flower got me thinking, so four years ago we planted up a small plot of vines and I'm pleased to say they've done really well. So well that eventually I'd like us to have about 1 1/2 acres of vines, producing our own methode champenoise!" 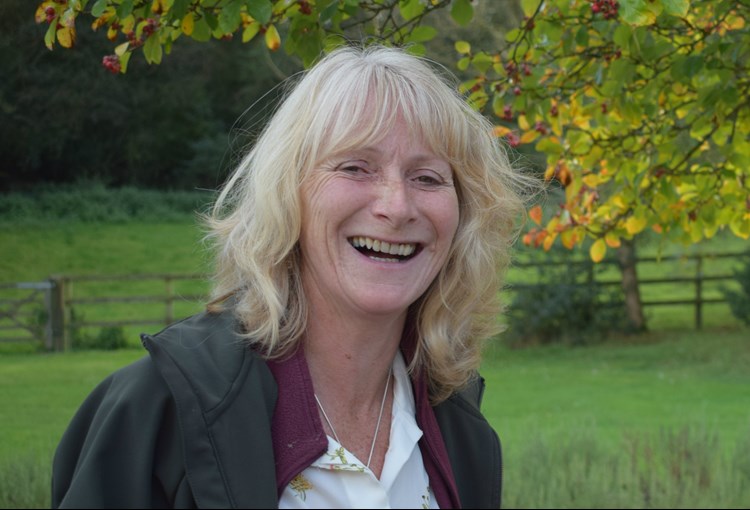 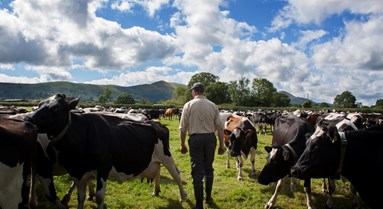 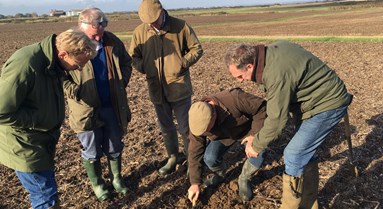