The humble earthworm should perhaps be considered as the farmers best friend – while hidden from sight, they are doing a grand job of keeping our soils in good condition, mixing organic matter and creating a more open, better draining soil through their tunneling activities.

However, many farming activities can reduce earthworm numbers in the soil, particularly in arable systems with regular soil disturbance, potential compaction and where there is little organic matter in and on top of the soil.

This means that the numbers of earthworms can be used as indicators of the condition of the soil and any management practices that affect it. At the start of March as part of the WOOFS project, we set out to count the number of earthworms on three farms in England. As you can imagine, after the incredibly wet February we experienced, it turned out to be a rather muddy affair! 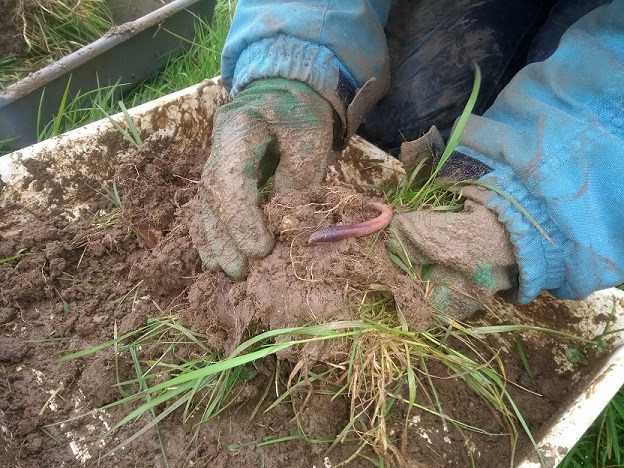 The WOOFS project is investigating the use of fresh and composted woodchip as a means of increasing soil health as well as giving farmers an incentive for managing on-farm woody elements such as hedgerows as an integrated part of the farm system. The project is led by Sally Westaway of the Organic Research Centre, in partnership with farmers, foresters and advisors. It has been carrying out on-farm trials where ramial woodchip (i.e. fresh uncomposted woodchip) has been applied to arable and vegetable fields. The impact on soil characteristics such as nutrients, soil organic matter and infiltration is then compared to ‘control’ plots which have either had no soil additions or have received the standard addition used by the farmer (e.g. compost).

To complement these soil characteristics, we also assessed the impact on earthworm numbers and identified the different species to compare different management treatments. The method is simple – just go and dig a square of soil (20x20cm, to 15cm depth), sort through for 10 minutes, pull out the earthworms and count. However, to make sure that we are getting a more accurate assessment, this method needs to be repeated multiple times in each treatment plot (which themselves are replicated three times). That’s a lot of digging! In total, across the three trial sites, in three days we dug and sorted through 165 soil cores and collected over 3000 earthworms. Luckily the rain held off for most of the fieldwork!

After collecting the earthworms, the next step has been to count and identify them. In terms of numbers, at Tolhurst Organics, an organic vegetable system, there were on average just under 32 worms per soil sample (20cm x 20cm) which, when scaled up, works out as just under 8 million earthworms per hectare. By comparison, the two other farms (Down Farm and Wakelyns Agroforestry), which are both arable farms, averaged under half that at just over 14 worms per sample and 3.5 million worms per hectare.

To identify the worms to species, firstly the adult worms are separated from the juveniles. Adult worms are easily identified by their ‘saddle’ which is a raised and usually different coloured band that circles the body about a third of the way down the body. In the UK there are 27 species of earthworm, although it is usual to find around 3-5 common species per soil sample. Only adult earthworms can be identified to species, but we can also tell something more about the juvenile worms and what they are doing in the soil, just based on their colour.

Their colour and size indicates which ‘ecotype’ they belong to – the ecotype describes where in the soil the earthworm lives and what they feed on. More information can be found at the Earthworm Society’s website. In many arable soils, the earthworm species that feed on leaf litter on the soil surface (‘epigeics’) are often rare or absent, as are the anecic species that build permanent vertical burrows and drag surface litter to lower soil horizons. By adding ramial woodchip or compost to the soil surface, we would expect to see higher numbers of the epigeic earthworms, as well as more anecic earthworms, depending on how frequent soil cultivations are.

The Organic Research Centre are now in the process of identifying the adult earthworms to species and analysing whether certain species and ecotypes are associated with either the ramial woodchip treatment or the control treatment. More results out soon.

Jo Smith is a soil ecologist who has spent many hours digging up earthworms in farmland and woodlands around the UK. Working as an agroecology researcher at the Organic Research Centre for the last ten years her research has focused on how trees can be integrated into farmland as agroforestry to balance productivity with environmental protection. Jo has made a recent move to an agroecology research centre in Portugal to carry on her work on agroforestry, albeit under a very different climate.

Why are worms important?