Supermarkets Stepping Up To Antibiotic Misuse

Stepping Up To Antibiotic Misuse

Today, the Alliance to Save Our Antibiotics issued a new report that takes a close look at what’s been changing in our livestock farming systems with regard to the use (and misuse) of antibiotics.

Titled Real farming solutions to antibiotic misuse, the report assessed the different antibiotic policies of supermarkets − to find out who is taking action to reduce antibiotic use in their supply chains, and who is falling behind. Promisingly, most of the supermarkets who were contacted by the Alliance were positive and proactive about sharing the work they have been doing in response to public concern around antibiotics use in livestock and developing resistance in humans further up the supply chain. As the large supermarkets hold 93% of the UK’s grocery market share, their willingness to be transparent about their role in reducing antibiotics use in food supply chains is of paramount importance.

Here are the questions the Alliance asked the UK’s eight largest supermarkets to find out where they stand on antibiotic use in food production: 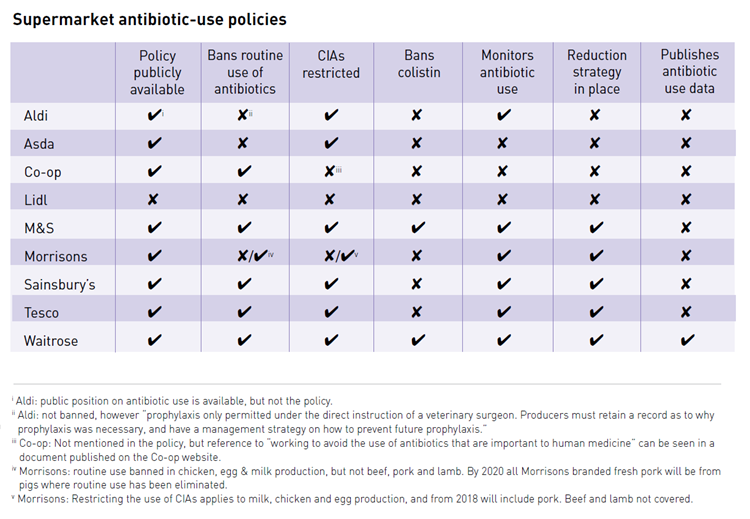 Five of the eight supermarkets have clear bans on their suppliers using antibiotics for routine prevention (Co-op, M&S, Sainsbury’s, Tesco and Waitrose), one has a ban in some species but not in others (Morrisons), one has some restrictions but no ban (Aldi) and two have no restrictions other than legal ones (Asda, Lidl). Overall, there is an almost equal divide between supermarkets that are and those that aren’t monitoring antibiotic use.

Waitrose leads the supermarket pack, having banned routine preventative use, restricted the use of critical antibiotics, and publicly stated that they’ve banned the use of the last-resort antibiotic colistin. They are also the only supermarket that has committed to publishing antibiotic-use data for its suppliers.

Marks & Spencer and Waitrose stand apart as the only two supermarkets to publicly state that they have banned the use of colistin.

Lidl is the only supermarket that has no publicly available policy and has made no public commitment to reducing antibiotic use.

Where monitoring is taking place by supermarkets, the pig and poultry industries are the most likely starting points as these sectors already have systems in place to do exactly that; the cattle and sheep sectors are still having their antibiotic-use monitoring systems set up. What’s important about knowing whether supermarkets monitor antibiotic use or not, is that it means they are more likely to have an antibiotic-reduction strategy in place – in order to reduce, they must first know where they’re starting from.

The Alliance wishes to see supermarkets now collecting and publishing details on their antibiotic use. This information should be published by antibiotic class, by species and by farming system. Such information will be invaluable for developing antibiotic-reduction strategies.

Why does the role of antibiotics in our food system matter?

A 2016 study commissioned by the Alliance to Save our Antibiotics and carried out by scientists at Cambridge University, found high levels of resistance to two or more highly important antibiotics on 189 UK-origin pig and poultry meat samples from the seven largest supermarkets in the UK (ASDA, Aldi, Co-op, Morrisons, Sainsbury’s, Tesco and Waitrose). The study was the first to examine UK-origin retail meat for resistance to a wide range of important antibiotics for treating E. coli infections, and the highly resistant ESBL E. coli was found on meat from all of the supermarkets. 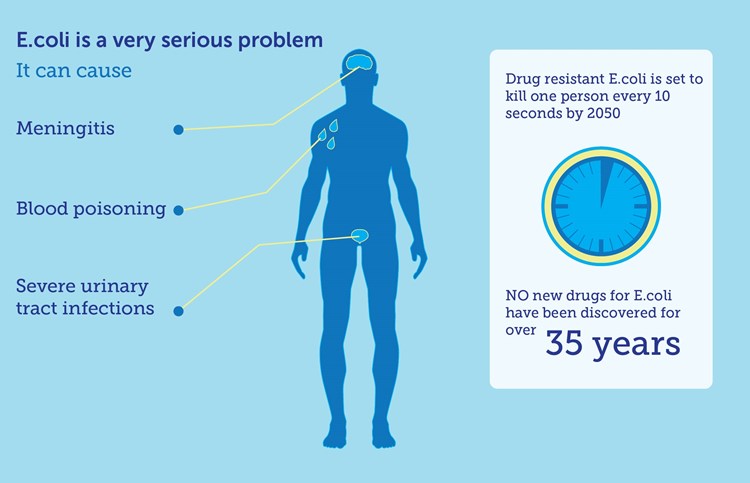 Mounting public and scientific pressure in response to increasing antibiotic resistance and lack of new antibiotic discoveries has led the British farming industry to reduce its use of antibiotics. Since 2006, no antibiotics can be used in farm animals for growth promotion in the European Union and can only be used in livestock if a veterinary prescription is obtained; and since 2012, the UK poultry industry has reduced its antibiotic use by about 70%, .

However, the Department for Environment, Food and Rural Affairs (DEFRA) does not gather statistics on antibiotics used on farms, except to record the total volume of UK sales; there are also no requirements on vets to report their prescribing practices in detail. Despite the key achievements in reduction, antibiotics use in the British pig industry is still significantly higher than in some other European nations: use of antibiotics is four times higher here than in Denmark and the Netherlands, and twelve times higher than Sweden. 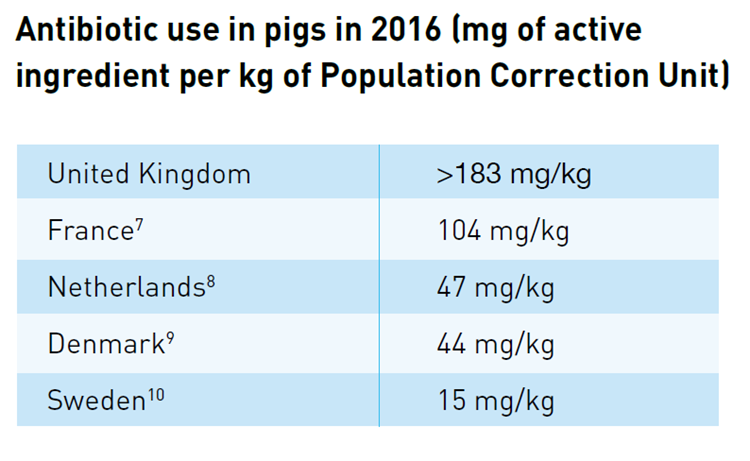 Overall, the progress from industry and supermarkets is welcomed by the Alliance to Save Our Antibiotics and by the Soil Association, as one the Alliance’s co-founding members.

The Alliance is calling for a ban of preventative use of antibiotics in animals that have not been diagnosed with any disease, and for a total ban on use of the antibiotic colistin, a “last resort”, life-saving treatment in human medicine. This year’s supermarket assessment will be repeated in 2018 and the findings will be released to the public once again, so it will be interesting to see how the major grocery players respond to this call for stronger antibiotic policies.

Fundamentally, only a deep-seated change in the UK’s national farming systems will reduce the spread of antibiotics across the food chain and the further development of antibiotic resistance in humans. The Alliance’s report shares its evidence that more robust breeds of farm animals, kept in improved living conditions and with a slower growth rate are better able to develop stronger immune systems and their own resistance to disease and infection.  Systems including free-range and organic have significantly lower levels of antibiotic use and will play a crucial role as we re-think our food and farming systems to drive down antibiotic use in farming to achievable – and acceptable - levels.

No Food Bill in the Queen's Speech

Together We Can Save Our Antibiotics

We can take action to save our antibiotics whilst preventing many animals from living a miserable, cramped existence. Together, we can prevent a human- health disaster and continue to improve the lives of millions of farm animals.
Take Action Today