What action is required to tackle ammonia pollution?

What action is needed to cut ammonia pollution?

Together with Plantlife International, ClientEarth, RSPB, WWF and the Woodland Trust, we have penned a letter to Secretary of State George Eustice to raise concerns over the failure to deliver on ammonia pollution.

What are the problems with ammonia pollution?

Ammonia threatens human health and is also one of the gravest threats to wildlife and the natural environment in the UK. It also causes soils to suffer, with excessive use of artificial fertilisers used in farming shown to acidify soils, affecting soil fertility, plants and nature across eco-systems.

Farm manures and fertilisers are the main source of ammonia gases and are also key sources of other forms of nitrogen pollution such as nitrates leaching into our rivers and streams, and emissions of nitrous oxide, a powerful greenhouse gas.

As part of this alliance of environment groups, the Soil Association is calling for urgent action to protect public health, nature and our climate following the publication of 2020’s air pollution statistics last week that show the government missed its ammonia target.

Legally-binding targets were set in 2016 to reduce ammonia emissions by 8% by 2020 and by 16% by 2030 – both compared to 2005 levels. But new data shows the 2020 reduction target of 8% has been missed. Reductions were nearer to only 7% over this 15-year period - and campaigners are concerned that without urgent action from Government, there is no hope of meeting the 2030 target. Ammonia emissions actually increased from 2013 to 2017, with most of the reduction taking place before the target was even set. 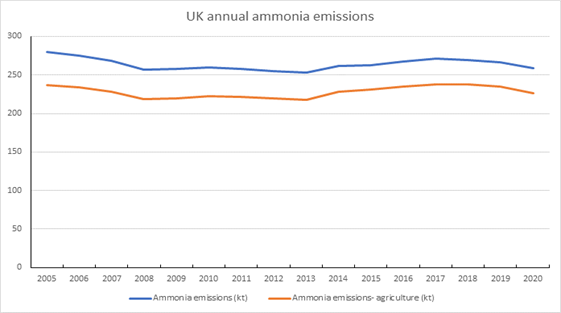 If we’re to turn the tide on the climate, nature and health emergencies, government urgently needs to spark ambitious action across the sector with more investment for farmer-led research into sustainable solutions.

Our Head of Farming and Land Use Policy, Gareth Morgan said

“The government’s lack of action to address harmful ammonia and nitrogen pollution is deeply concerning. This toxic pollutant is shortening people’s lives and devastating wildlife. We must improve efficiency in how ammonia and nitrogen are used in farming so that less is wasted. But it’s also essential to see a reduction in the amount being used in the first place, with a radical shift away from artificial fertilisers. Farmers urgently need support to adopt agroecological, nature-friendly practices across the whole farm, using cover crops like clover and legumes and pulses in their rotations to naturally boost nitrogen in soils instead and reducing reliance on increasingly expensive nitrogen and ammonia fertiliser from the bag. If we’re to turn the tide on the climate, nature and health emergencies, Government urgently needs to spark ambitious action across the sector with more investment for farmer-led research into sustainable solutions.”

Action from Government is needed

Our alliance of groups has criticised the government over its lack of ambition or urgency in protecting public health, nature, and the environment from the damage this pollutant can cause. This has led to ammonia pollution sitting at similar levels for more than a decade – despite the many risks it poses.

The government has relied too heavily on voluntary action by the farming industry and emissions of ammonia, which is a form of nitrogen, are a warning signal for the wider impacts of excess nitrogen. Nitrogen pollution from agriculture, transport and other sources is a significant cross-cutting issue which needs a joined-up approach across government departments.

The alliance is calling for a comprehensive approach to nitrogen more broadly, as advocated for in WWF’s recent report ‘Nitrogen: finding the balance’ and the Soil Association’s ‘Fixing Nitrogen’ report.

Read the letter to the Secretary of State in full here.

Sign up for the Soil Association newsletter to stay up to date with all our campaigning on this issue.