Soil took centre stage at a Groundswell panel event yesterday with Secretary of State George Eustice saying in his speech that soil is “at the heart of successful farming”.

The minister was joined by Green Party peer Baroness Natalie Bennett, Natural England Chair Tony Juniper and NFU President Minette Batters – and there was unanimous recognition of the importance of healthy soils.

We were really pleased to hear Mr Eustice acknowledge how he had “listened carefully to groups like the Soil Association” regarding the support needed for the organic sector, leading to a renewed commitment to an organic standard as part of the Sustainable Farming Incentives.

Despite strong positives around soil health, Natalie Bennett and members of the audience including the Soil Association expressed disappointment in the recent Food White Paper, in particular the failure to adopt the recommendation to ban advertising to kids and promotional deals in regards to junk food. 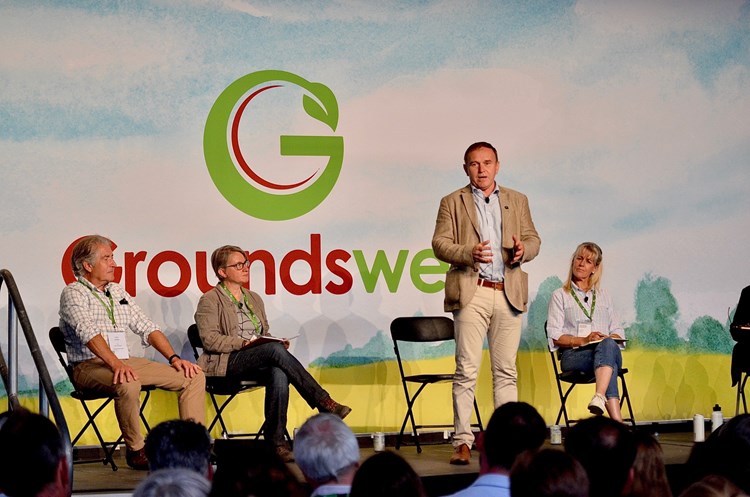 Our Head of Farming Policy Gareth Morgan said: “Both the audience and the panel - and the success of Groundswell itself - send a clear message that healthy soils are essential for sustainable, successful and profitable farming. We welcome the recognition of the importance of soil given by the minister at both today’s event and within the new Sustainable Farming Incentives – and the renewed commitment to an organic standard within the new payment scheme following a strong case to the government made by the Soil Association.

“What is more disappointing is the government’s lack of robust action to enable people to eat more healthily. George Eustice was told at today’s event that our food culture is broken with diet-related poor health soaring, and that the opportunity for the government’s Food Strategy to be the holistic, joined up plan needed has been missed. His defence of the failure to adopt Henry Dimbleby’s recommendations to make healthy food more available and junk food less available felt limp. His dismissal of the need for government intervention to spark a diet shift to less intensively produced meat and ultra-processed foods ignores the elephant in the room.

“As key advisors to Henry Dimbleby and his team, we will continue to put pressure on the government to adopt Henry Dimbleby’s National Food Strategy recommendations in other government plans that are due to come forward, such as the Health Disparities white paper.”

On the whole, the depth of discussion, which seemed broader than it has been previously, with a wider focus on food policy and system change discussions, was really welcomed by the Soil Association. A full round up of the event will follow in the coming days, once we have had a chance to recover and reflect!