From Mayhem To Miracle

From Mayhem To Miracle

So, I guess you are dying to know, did we make it? Were we able to turn the mayhem of a building site into a functioning mini hotel over one hectic weekend? Well, of course we did, somehow. On Monday at 3pm, the health and safety officer signed off the rooms of the Royal Oak as fit to inhabit. At 6pm, following three hours of frantic bed making, our first paying guests arrived. Luckily there were only two of them and the rest of the guests that night were the amazing staff team who had wrought this miracle … and now had the hopefully enjoyable task of testing the rooms.

We cracked open a bottle of bubbles and celebrated with a feast at the pub, along with our rather bemused guests. By midnight, the first ‘snags’ had become apparent; the hot water system was clearly not functioning in half of the rooms, and the generator which is keeping the place powered until our electricity supplier can upgrade the lines next week, conked out. And by 7am, Sue’s early morning shower gave Sam, in the room below, an unexpected dousing in bed. Despite all this, the style of the place stunned everyone, including me. Just a bit of ironing out to do…. 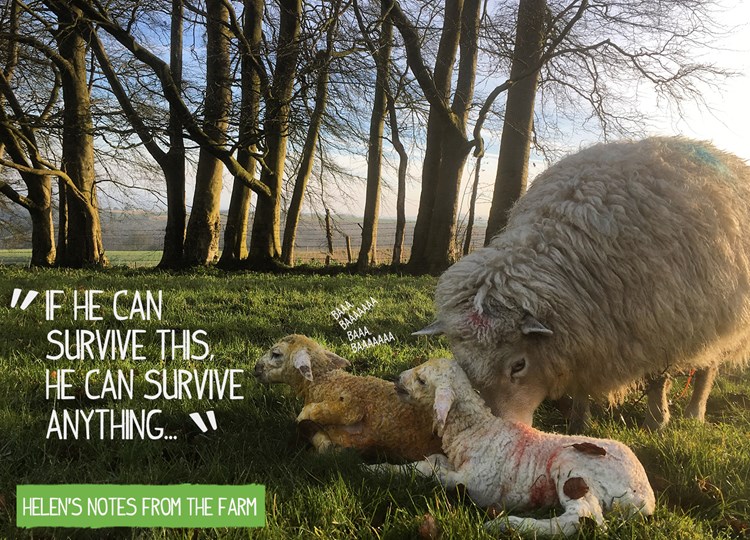 This week saw the newly calved cows move to the top of the downs, along with the mobile parlour. Madness, but this is where the grass is. A filthy wet, cold start to the week tested Dai’s resilience! Training cows to a completely new system, getting to grips with the kit, and lambing six hundred ewes at the same time; if he can survive this, he can survive anything. By Friday it was starting to get a bit easier, with bright clear weather, and cows starting to get the hang of it…and Sophie’s now home for the hols too, so he can get on with milking first thing, while she checks the sheep. I’ve been worried about mastitis, on a once a day system, but so far so good, except one heifer who calved down with it. Bacterial counts are a bit higher than we would like, but should be resolved once the volumes of milk built up so that milk cooling is easier. 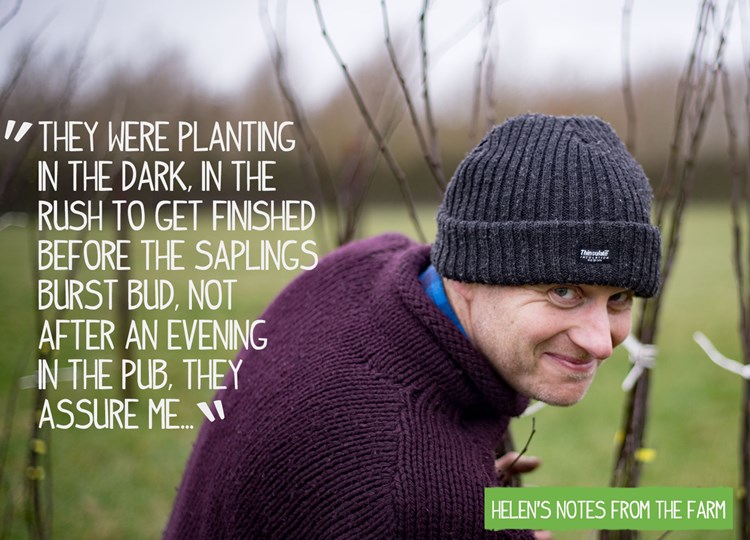 Ben finished this winter’s tree planting too this week. A few wonky lines, which will give us some headaches when fencing (they were planting in the dark, in the rush to get finished before the saplings burst bud, not after an evening in the pub, they assure me), but at least they are in. On Pump Field, where it’s mostly Perry Pears at the moment, the guards look tough enough to protect against the marauding deer, but we will find out soon enough.

We had the bank manager in on Monday, which meant all our budgets and cash flows for the various businesses needed to be ready for scrutiny. That’s a big job in more stable times, but with feed prices rising, Tb lurking, the dairy and pub projects, there’s plenty of unknowns to try to factor in. At least our Countryside Stewardship proposal has been accepted; this runs for five years, so gives a bit of income certainty beyond the EU exit time frame, and allows us to do some things like willow pollarding and hedge laying that are hard to justify without support. We’ve given the budgets our best shot, and the bank manager seemed sanguine. Now we just need to make it all work financially as well as in practice.

Did you miss Helen's last blog? Don't miss out on the full story - catch up now.
Read Last Week's Blog

Our members are at the heart of our work. Be part of the good food revolution by giving a regular gift from £3.50 a month.
Join today