Congratulations to the Soil Farmers of the Year!

Congratulations to Clive Bailye, who has won the UK Soil Farmer of the Year, and to runner up Iain Tolhurst.

The competition was launched this year and is organised by Farm Carbon Cutting Toolkit (FCCT) and Innovation for Agriculture (IfA). The award aims to find farmers and growers who are passionate about managing their soils in a way which supports productive agriculture, reduces greenhouse gas emissions and builds soil organic matter and carbon.

Winner Clive Bailye is a large-scale arable farmer in Staffordshire and last year he took part in an Innovative Farmers field lab. The group were looking at how using 'compost teas', a mix of compost and non-chlorinated water rich in micro-organisms', can improve the yields of wheat crops. Clive has since incorporated compost tea into his soil health routine, which along with all the work he's been doing over the past six years to build his soils productivity has meant he's been able to cut his chemical inputs and for the first time he can see how organic arable farming can make financial sense.  Reducing his chemical inputs has also meant savings for his business, making it more resilient against future risk and volatility.

Liz Bowles, Head of Farming says the award is a great way to recognise the value of our soils. "I am delighted that FCCT and IfA have instigated this annual award to recognise the efforts of UK farmers in going the extra mile to ensure that their soils are looked after as well as possible whilst being productive and profitable. The awards also recognise the commitment to continuous improvement with all the finalists showing their passion for implementing cutting edge practices to improve soil health."

A very worthy runner up

Second place went to Soil Association licensee, Iain Tolhurst who runs Tolhurst Organic a horticulture business in Berkshire.  Iain impressed the judges with his impressive knowledge and understanding of how to maximise soil biodiversity and his innovative use of composts and green manures within his rotation, as well as his agro-forestry system. As well as certifying with the Soil Association, Iain has been involved in the Duchy Future Farming programme and is a Future Growers host. A special congratulations to Iain, who celebrates his 40th year of organic farming this September! 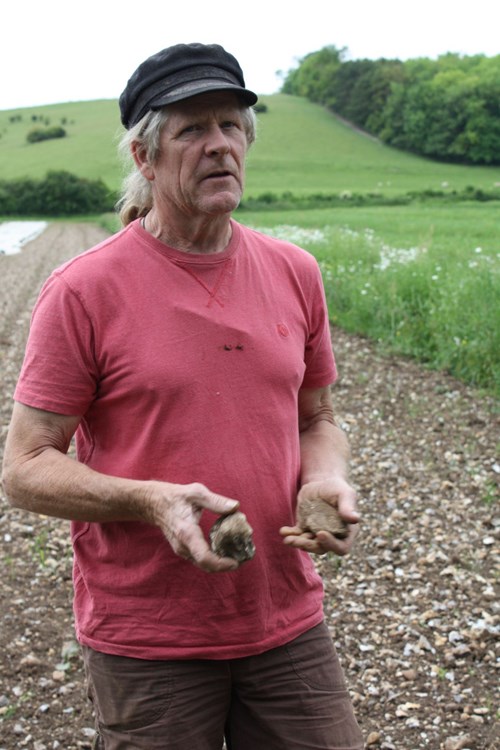 Iain speaking to a group of Future Growers about the importance of soil health.