How do neonicotinoids work?

How do bees and other wildlife become exposed?

These insecticides are supposed to be more targeted than non systemic pesticides. One might think that would prevent them from contaminating both the countryside and beneficial wildlife, but that’s not the case: 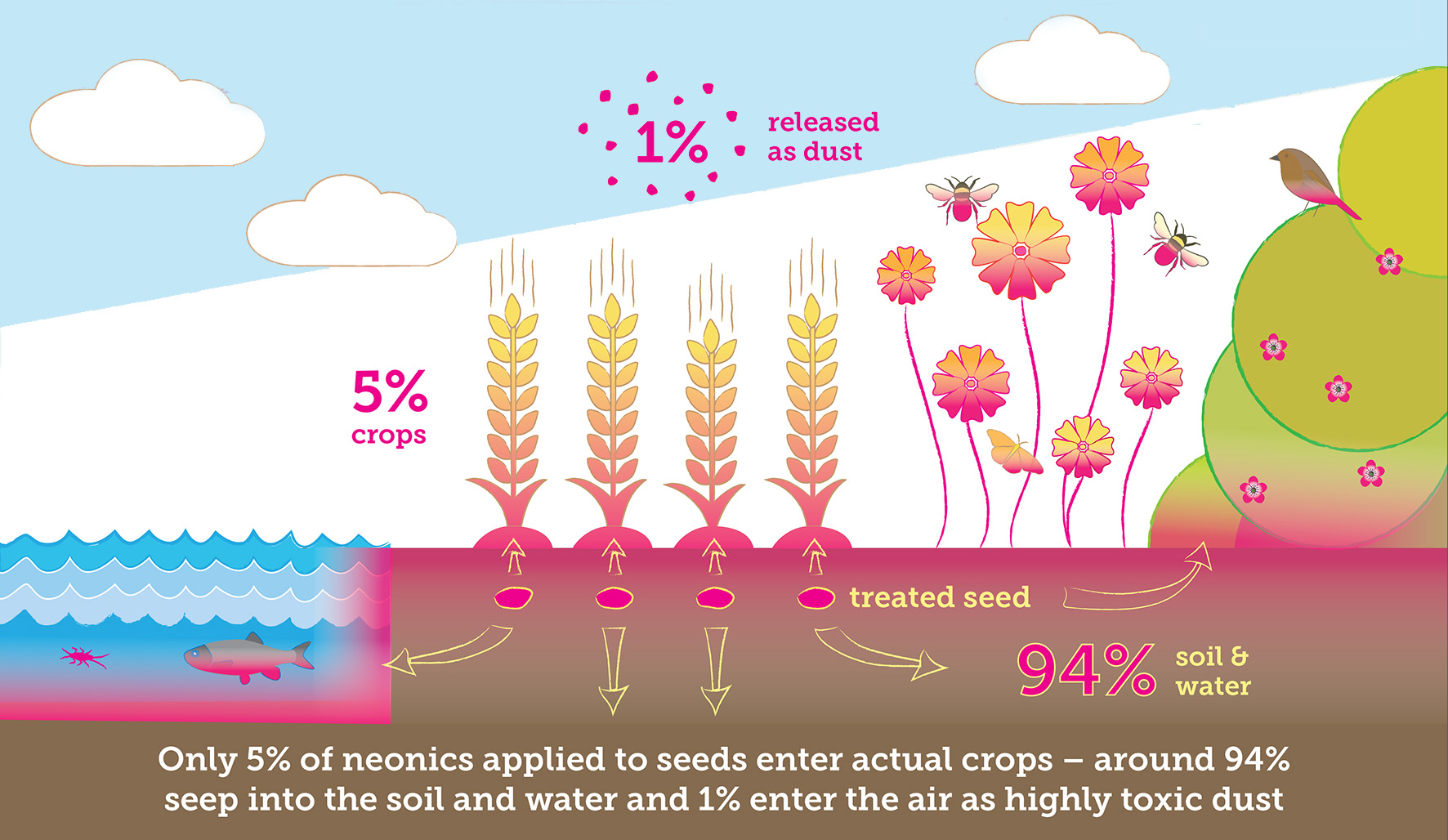 A pesticide cocktail in our countryside

Pesticide approvals are largely based on safety tests of individual pesticides But farmers don’t apply just one spray on a farm – they apply many; insecticides, fungicides, herbicides and more. So we wanted to know if UK wildflowers were being contaminated not just with neonicotinoids, but multiple pesticides—exposing our bees and other wildlife to a pesticide cocktail.

Thanks to the Roddick Foundation, the Soil Association part-funded research by Sussex University to investigate the presence of pesticide cocktails in UK wildflowers.

The researchers focussed on wildflowers growing nearby crops treated with neonicotinoids. The researchers also tested the pollen collected by honeybees and bumblebees to see if these pesticide cocktails were making it back to their nests.

What did they find?

It is clear that insects visiting wildflowers in field margins are chronically exposed to a cocktail of chemicals. The effects that this has on their health have never been studied, and there is an urgent need to do so. In the meantime, the precautionary principle would suggest that we should take steps to reduce this exposure as much as possible. Professor Dave Goulson, Sussex University

A few years ago, evidence was mounting linking neonicotinoid insecticides to declining numbers of bees. Against the wishes of the UK government, this led to a temporary EU wide ban on the use of three of these insecticides, though on flowering crops only. Since the start of the partial ban in April 2013, the evidence against neonicotinoids has become stronger, and more severe.

These insecticides are still poisoning our countryside – getting into soils, wildflowers, hedgerows, streams and trees near to treated crops. This includes wildflowers, shrubs and trees next to crops like wheat and barley, which are still allowed to be treated with these chemicals.

All aquatic, soil living, leaf eating, sap sucking and nectar feeding insects are at risk – and so therefore are all our farmland birds and other animals that eat them. Worse still, Soil Association funded research has found that wildflowers near to treated crops are contaminated with a whole cocktail of pesticides, which earlier research shows could drastically increase the toxicity of neonicotinoids.

Join us today, and together we can create healthy farmland and countryside without these poisonous pesticides.
Join us