Did you know that 'We Wish you A Merry Christmas' was a 1930s carol composed by Bristolian organist Arthur Warrell?

Still sung every year by hordes of rosy-faced children and adults nationwide, the song is largely responsible for the survival of the figgy pudding.

Fittingly, this recipe is provided by Shipton Mill, an organic flour mill in the heart of the Cotswolds that's also steeped in South-Western history. Following a tradition of milling in the Moyne Wood area that dates back to the times of the Domesday Book, Shipton Mill specialise in ancient, rare and organic grains.

This recipe uses their festive chestnut flour and as a result, is 100% gluten-free. it can be made up to six weeks before Christmas, leaving you and your family with plenty of time to learn the lyrics to those carols! 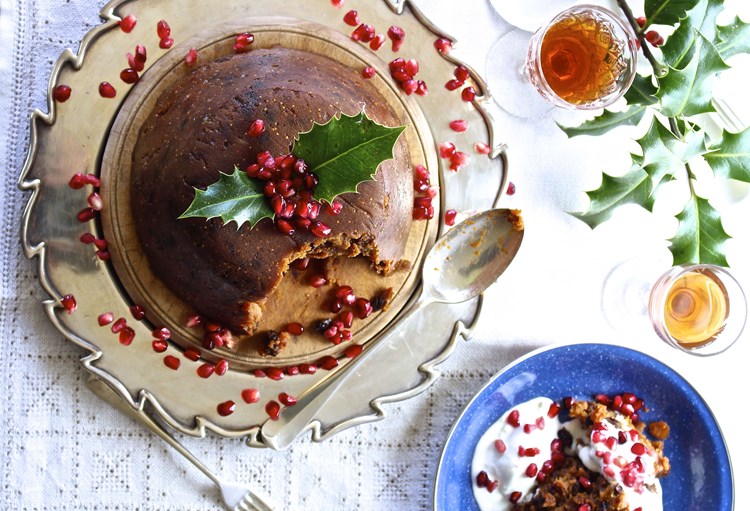 Measure all the dried fruit into a large mixing bowl. Add the calvados into the bowl and begin stirring. Add the grated apple, almonds, orange and lemon zest and the orange juice, and give it a really good stir with a mixing spoon.

Cover the bowl with cling film and leave overnight for the fruit to soak up the liquid (you can skip the overnight soaking if you don’t have time).

Weight the chestnut flour and sugar into a separate bowl, and add the mixed spice, cardamom and nutmeg. Combine thoroughly, before adding to the soaked fruit and stir

In a small non-stick saucepan, begin to melt the butter over a low heat. Remove the pan from the heat when the butter is roughly one third melted, allowing it to liquefy at a cooler temperature. Whisk the two eggs until frothy in a bowl, then stir the melted butter followed by the beaten eggs into the Christmas pudding mixture. Make a wish!

Spoon the mixture into the prepared basin. If it doesn’t come with a lid, you can make one using a sheet of foil and a sheet of greaseproof paper. Place the foil on top of the greaseproof paper and fold a 2.5cm pleat down the centre. Cover the top of the basin with the foil on the outside, and the pleat running down the middle of the bowl. Tie tightly with string under the rim of the pudding basin. Trim off the excess leaving roughly 5cm of foil under the string. Tuck the remaining foil up and under the greaseproof paper to seal it in. Tie a string handle so that you can lift your pudding in and out of the steamer or pan.

Stand the pudding in a deep pan of hot water on a heatproof metal trivet to prevent the basin from touching the base of the pan. The simmering water must come half way up the basin for the pudding to cook properly, but no higher. Simmer gently for 4 ½ hours, topping up with hot water as necessary. Check on it regularly to make sure it doesn’t boil dry, and making sure the water doesn’t get in.

Once your pudding is cooked and has cooled completely, replace the lid with a fresh layer of greaseproof paper and foil, and tie securely.

If you’re not eating the pudding on the day of making, to serve at Christmas, re-heat it for 2 hours using the same method as for the first steaming. Serve with brandy butter, custard or cream. We like to sprinkle some fresh pomegranate seeds on for a burst of flavour and colour as well.

Keen to learn more planet-friendly, ways of cooking? Sign up for our email newsletter for top tips on sustainable living, and be the first to hear about our campaigns for nature-friendly food and farming.