Megan Lee reports on alternative methods of worm control, which offer a path to phasing out anthelmintic usage in organic livestock.

What are helminths and anthelmintics?

Helminths is a generic term used to describe parasitic worms, shown to effect growth, productivity and the health and welfare of livestock. Anthelmintics (or antihelminthics) are a group of antiparasitic drugs used to treat infected animals - the most common method of treatment used in organic small ruminant production (sheep and goats).

It’s not surprising that anthelmintic resistance is ubiquitous across Europe and parasite burdens continue to cause significant cost and losses to producers. Annual cost of resistance in Europe are estimated at €38 million per annum and predicted to keep on growing [1], so finding a solution to this issue is so crucial. Experimenting with alternatives to anthelmintics is one of the farmer-led trials we're working on in association with Scotland's Rural College (SRUC) as part of RELACS (aiming to remove contentious inputs from organic farming systems).

The research takes a dual approach to parasite control, due to the separate infective stages of the worms of L3 and L4 (see below), and is looking at the effectiveness of two control strategies: heather as a bioactive forage and Nematophagous fungi as a biocontrol agent. 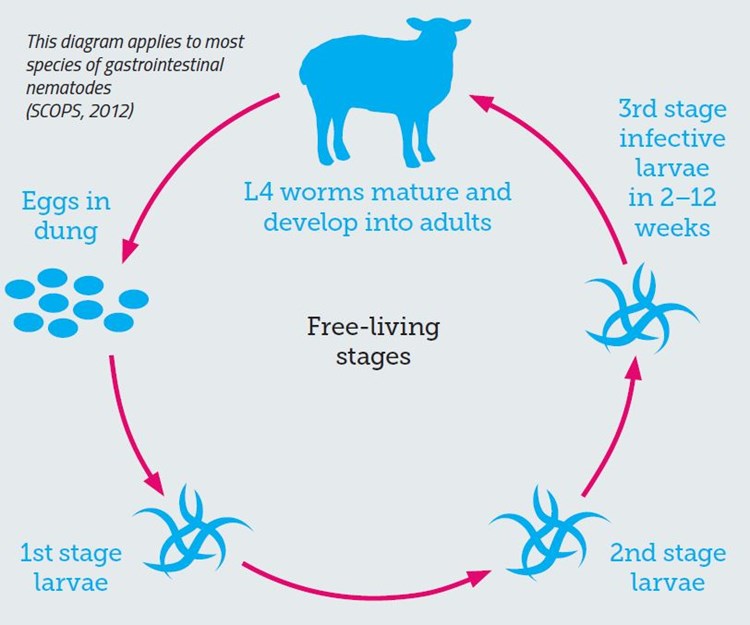 The research investigates the effectiveness of bioactive plants in controlling internal parasites, specifically two species of heather, Calluna vulgaris and Erica cinerea. Plant secondary metabolites (PSMs) are present in bioactive plants, but are not needed in their day-to-day function. Instead, they hold important roles, such as defences against predators and plant-to-plant signalling. One example is tannin and research shows that plants rich in this compound have a positive impact on reducing parasites. Tannins have been associated with the decreased establishment of L3 parasite larvae [3] and a decrease in the excretion of eggs which may link to either a reduction in worm numbers [2,3] or a decrease in female worm fertility. Less consistently, they show a decrease in the development of eggs to infected larvae in faeces [4]. 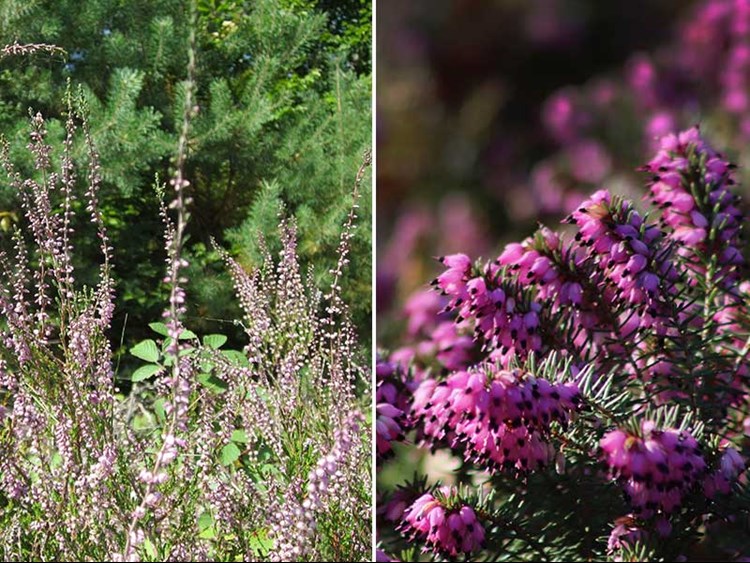 Heather contains condensed tannins and experimental evidence shows that goats grazing the plant have a reduced parasite burden in comparison to those that don’t. Anecdotal evidence also shows similar results in hill sheep, although it is important to note hill sheep are more resistant to parasites in general, for a number of reasons.

Can heather prevent eggs from hatching?

The first stages of research were carried out in vitro, with the aim of determining whether heather can immobilize L3 larvae or prevent eggs from hatching. The two heather species were collected in the UK (Scotland), Germany, Norway, Switzerland and Spain. Samples were taken in both winter and spring and then tested at different doses on two common species of sheep parasite Teladorsagia circumcincta (an abomasal worm) and Trichostrongylus colubriformis (an intestinal worm).

The findings were positive, showing heather affected egg hatching. However, the impact differed depending on the worm species, showing T. circumcincta. was more impacted by heather than T. colubriformis. The plant’s country of origin also appears to influence efficacy, which is measured by the highest reduction in parasite activity from the lowest dose of heather. UK heather was deemed the most efficacious, while Norwegian heather the least, although a significant reduction in hatching and worm mobility was still seen.

Researchers hope to determine the quantities of heather required for a successful result although this could vary greatly depending on location and species of heather/parasite. This is because it has been shown that the richer the heather in tannins, the less that needs to be consumed, so work is needed quantifying the relationship between the variables.

Stage 2: the combined reaction between heather and nematophagous fungi

The second stage of the trials looks at the relationship between a nematophagous fungus (Duddingtonia flagrans) and heather to determine efficacy as a combined approach to parasite control. The aim is to decipher the impact of nematophagous fungus; and whether a combined approach of heather and D. flagrans is more effective than alone. The first stages of research have been carried out in vivo and in vitro with the next phase taking place on farm.

Livestock act as a vehicle for the fungus, which is administered by creep feed and then expelled in faecal matter with no impact on livestock. Once germinated outside of the animal, D. flagrans produces traps which capture the nematodes, destroying the parasite’s internal organs. Larvae in pastures are therefore reduced, leading to reduced reinfection of animals. D. flagrans is already recognized as a highly efficient biocontrol agent against gastrointestinal nematodes and has been widely studied. The fungus alone can reduce pasture contamination by around 70 per cent and has been used to successfully control helminths in livestock production [5].

The need for more on-farm testing

The research to date shows that both heather and D. flagrans work in experimental conditions, however it is imperative this is tested at farm level. The objective is to carry out trials in the UK, Germany, France and Switzerland, comparing results from different flocks exposed to either traditional management techniques, heather and/or fungi. The trials will record and monitor FECs, the number of anthelmintic drenches administered, weight gains and livestock finishing time frames to measure success.

Treating without anthelmintics - next steps

There are still questions around alternative methods of control that need to be answered including the amount of heather necessary to successfully reduce burdens and how can farmers with no access to heather benefit from this research.

However, initial results from the RELACS trials are positive and suggest there are alternatives to veterinary medicines that need to be explored further to tackle the widespread issue of anthelmintic resistance.

Worm control without anthelmintics was the subject of a workshop session at 2021 Oxford Real Farming Conference. You can watch the webinar here:  https://youtu.be/4V5M0PniANo

This article was first published in the Spring 2021 edition or Organic Farming Magazine.

Megan a producer certification officer at Soil Association Certification. She grew up in North Devon, horse mad, looking after chickens and growing vegetables. Her love of animals inspired her to study both undergraduate and post graduate degrees in wildlife conservation. Working as an assistant ecologist for a season helped develop her understanding of the value of sympathetic farming.

View all posts by author
Herbal leys and forage crops