If you can’t stand the heat…

If You Can’t Stand The Heat…

It’s been an all-consuming few days, in the hottest week of the year… interviewing potential new Soil Association trustees, then a couple of days at St George’s House discussing how best to support farmers through Brexit. On Thursday we had the Soil Association’s 70th-anniversary celebration with our Royal Patron Prince Charles plus 300 fantastic guests, in London, followed by a quick trip to Edinburgh for the Royal Highland Show. 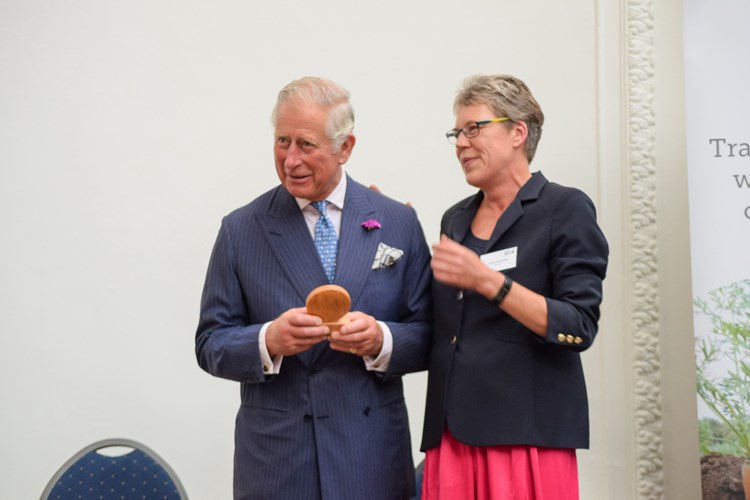 I've spent a lot of time away from the farm this week, but there's still plenty to talk about. So it was Saturday morning at 8am, in the company of 15 Danish farmers, that I finally got to see what progress has been made this week. Slightly bleary-eyed after a very late night home courtesy of delayed planes and trains, we went to explore. They were especially interested in our arable farming, so we ventured up to 60 acres and Haybarn, to see the spring cereals… passing the first sows and growing pigs that have this week moved onto their new field, Broad Gap. They were impressed by both the crops and the pigs, saying that both looked as good or better than their ‘conventional’ equivalents in Denmark. 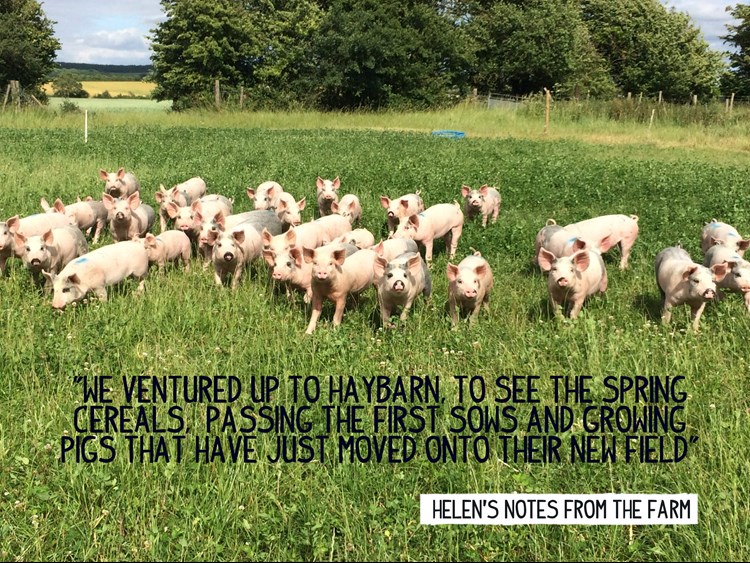 The farmers were fascinated to hear about our method of rearing calves on older dairy cows, so we bravely navigated our way through the 400 runners who were competing in either a half marathon or 10k run starting on the farm. We served breakfast to these brave souls from the Flying Pig in the makeshift car park up on the downs, though how anyone can run a half marathon on a bacon butty beats me! This event, the Ridgeway Revenge, has become an annual fixture, and I’m keen to mark the route so that visitors to the pub can take on the challenge any time of the year. 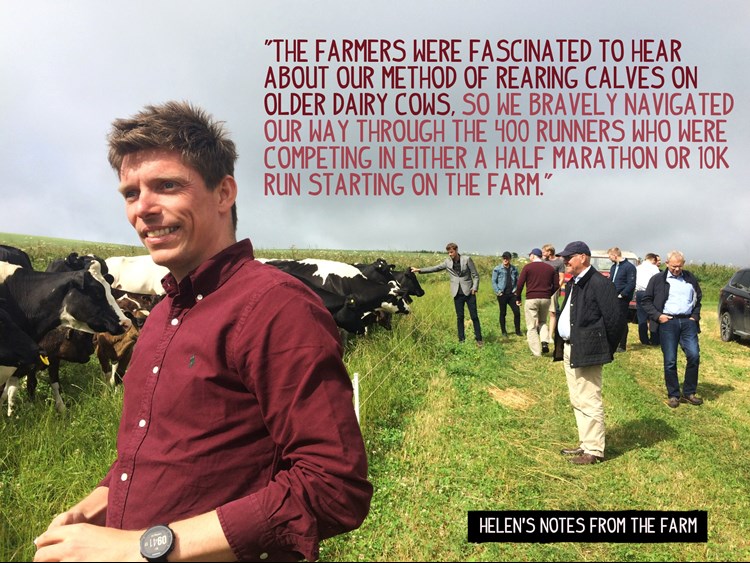 Then a trip to see the dairy cows. They are still milking well, and despite this week’s heat wave, there’s a huge amount of grass about. For this cycle of grazing, we are pre-mowing, so that the cows go into paddocks with the grass already cut. This means they pick up all the grass cleanly, rather than picking out the bits they like best; this allows the leys to regrow evenly, maintaining the grazing quality for the second half of the season.

The farm team have made over 550 big bales of hay this week, plus 250 silage bales. It’s been perfect conditions, and brilliant to get the fiddly work cutting the grass around our newly planted orchard trees done. It will make it much easier for Ben to mulch around the trees with woodchip, which I gather will be this week’s task. Where he has done this already, the chickens seem to be keeping the ground clear through their constant scratching; perhaps this is the organic solution to weed control in young trees!

Henry, the farm manager, has just been in for our Sunday morning catch up. We are desperately short of staff, with Clive on holiday, Tony… one of the pig guys…away with a bad back, and Andrew B managed to cut his leg, so he is off too. Fencing contractors are due in next week, and we have old fences to remove so that they can have a clear run; all the hay needs bringing in before we get much rain, and we will need to get going with second cut silage too as soon as we can. It’s all a bit of a juggling act, even though to external eyes it all looks under control.

Then it’s Claudio who calls for coffee, to discuss his plans for the mozzarella business. He has largely halted production for the last few weeks, following his accident driving home late and tired from London. With a wrecked van, he hasn’t been able to distribute; it’s possibly a good moment to pause, and think through how he will make the business more manageable. Like many enthusiastic entrepreneurs, he has taken on a lot, trying to keep an eye on production in a not altogether suitable building on the farm, while doing all the sales and marketing and deliveries himself. The good news is that so many people love his products, and they are fantastic, but he needs some help with the things he is less good at. I sense some longer conversations over the next few weeks.

The Oak seems to be constantly thronging with people now, which is brilliant. We are somewhat sport obsessed, so the Lion’s trip to New Zealand means rugby breakfasts each Saturday now to view the matches… we have finally caved in and taken Sky to get through the tour. On Wednesday evening it’s onto cricket, with Pat Murphy and Ashley Giles speaking over dinner. No one has more of the inside track than Pat, or gossips more freely, so any cricket fans, get over here (but book…still a few places left) 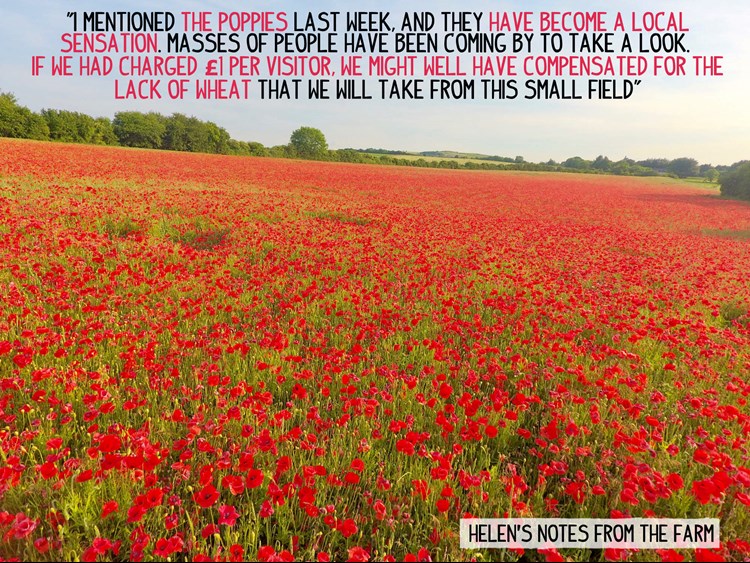 I mentioned the poppies last week, and they have become a local sensation. Tim flew a drone over them on Monday, and posted the pics; masses of people have been coming by to take a look, and the Defence Academy based near us in Watchfield have been taking pictures for Help the Heroes type publicity too. If we had charged £1 per visitor, we might well have compensated for the lack of wheat that we will take from this small field… but while as a farmer I am dismayed at the infestation, the glory of this splash of colour in the landscape, and everyone’s enjoyment of it, outweighs that by far. They are nearly over now, but enjoy the view from the air from earlier in the week. 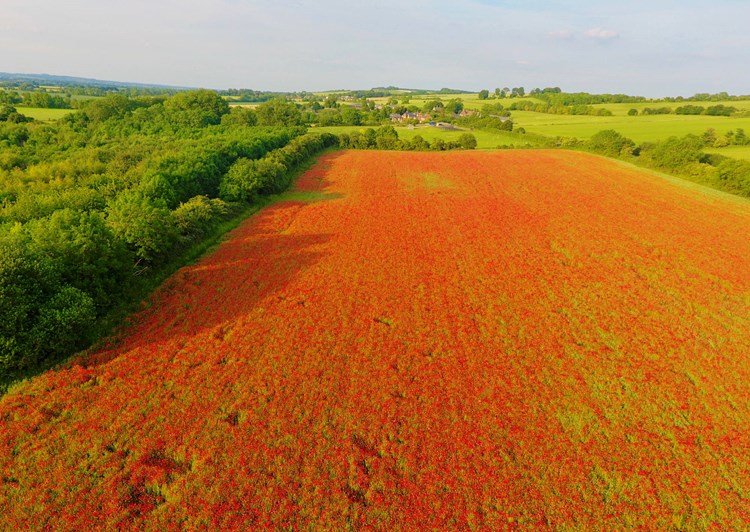 Helen's Notes From The Farm - Week 11

Helen's Notes From The Farm - Week 10

Helen's Notes From The Farm - Week 9