What is the best choice when looking to buy a sustainable Christmas tree?

The ‘real vs fake’ Christmas tree debate hasn’t shown any signs of slowing down, with different groups coming out in favour of one side or the other.

The British Christmas Tree Growers Association (BCTGA) estimates around seven million trees are bought each year in the UK, with the vast majority of real ones - around 80% - being the Nordmann Fir.

Most trees are UK-grown, with only around £3 million worth of Christmas trees imported into the UK in 2017, according to government figures. However, recent statistics suggest that almost half of all trees sold are fake.

So, what's the environmental impact of a real or fake tree? Which is the most eco-friendly option?

Read on to find out:

What are the differences between real and fake Christmas trees?

Most artificial trees are made in China, with the dual environmental impact of being made from plastic, PVC and metal, and then shipped overseas.

However, it isn’t just the manufacturing that racks up their carbon footprint. Artificial Christmas trees aren’t recyclable, so when they’re inevitably thrown away, they end up in landfill, going nowhere fast. 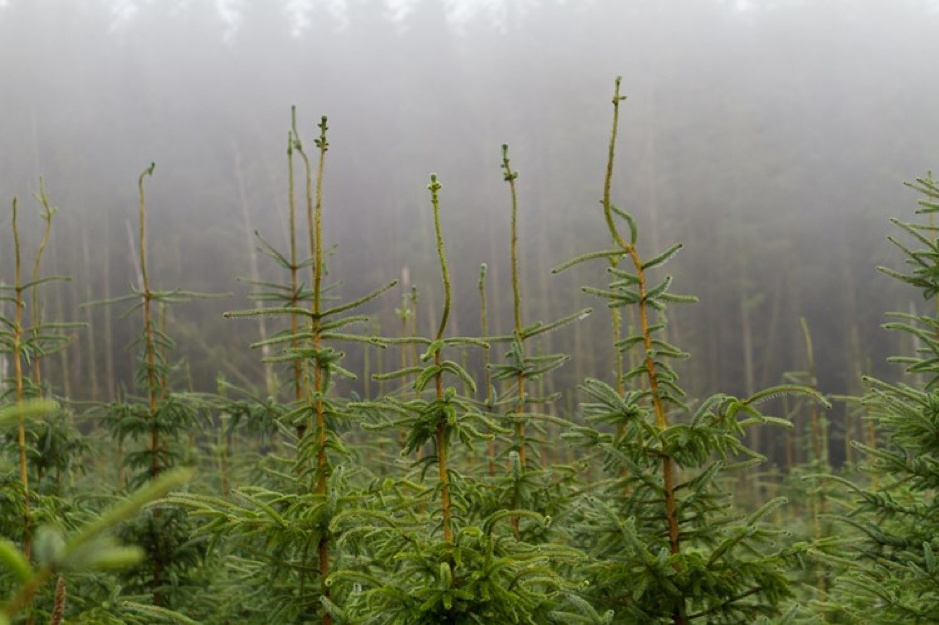 According to the Carbon Trust, a two-metre artificial tree has a carbon footprint of around 40kg, more than ten times that of a real tree that’s burned after Christmas.

In other words, you’d need to re-use an artificial tree 10 times to negate its carbon footprint, yet it’s estimated that fake trees are used only four times, regardless of improving quality.

A two metre artificial tree has a carbon footprint of around 40kg, more than ten times that of a real tree that’s burned after Christmas.

Compare this with a real, locally sourced tree and the difference is stark.

Christmas trees take around 10-12 years to grow to the most popular size of 6 feet. During that time, they provide a habitat for wildlife and capture carbon from the atmosphere.

Of course, if this year’s tree ends up on the rubbish heap, it will have a greater impact (through decomposing and releasing methane) than one that is used for wood chip or burned.

Local authorities often offer a collection and chipping services, with chips used for mulching, or trees can be composted and used as a soil improver. Burning is a particularly effective way to dispose of a used Christmas tree and reduces potential emissions by 80% over those that are thrown out. You can even extend the Christmas joy by re-using your tree as a home for bugs and birds in your garden.

Christmas trees suffer from similar pest problems as many crops, so pesticide use is often high. However, it’s worth looking for Forest Stewardship Council (FSC®) Certified trees, as they’re grown in a responsibly managed way and often minimise pesticide use.

Learn more about the impact of sustainable forestry here.

If possible, source from an organic independent retailer or farm shop, as these providers are more likely to opt for growers who totally avoid pesticides on their farms.

It goes without saying, the more locally the tree is sourced the better, as it reduces the miles travelled, supports the local economy (a lot of work over many years goes into growing Christmas trees) as well as – hopefully – adding an extra element of traceability to the centrepiece of your Christmas decorations.

What's more, the import of live plants from abroad poses a huge biosecurity risk to plant species in the UK, introducing pests and diseases that can have a devastating effect on our farms and woodland. Opting for a tree with a Grown in Britain certificate guarantees your Christmas tree won't have been imported, helping to reduce this risk as much as possible - find your nearest Grown in Britain seller here.

Nestled in the Kent countryside, the nursery was founded by Alan Hitch in the 1960’s. The farm hosts 12 different varieties of hand-pruned Christmas Trees, from traditional Norway Spruce to striking blue Colorado Silver Fir and the exotic Korean Fir.

When Alan retired aged 89 in 2016, his son Julian, and Julian’s wife Toni, took over the business, bringing their own passion for life, ecology and wellbeing to the trees, and sharing the experience with the public. Julian explains ‘I wanted to share the beautiful experiences I had with the trees as a child. By giving access to the farm, each person can become connected to the whole growing cycle of the tree’.

They use organic chicken waste fertiliser once to twice a year, and the rest of the time it’s simply a matter of weeding, mowing, pruning and digging up the old stumps. Most of this is done by hand tools - last year the team dug up over 1,500 stumps by hand! This helps keep the intrinsic soil structure rather than using diggers, which can upset the ecological balance.

Pesticide use: ‘Pesticides, whilst seeming helpful, actually create more of a long-term problem,' says Julian. 'Just like we need good diversity of bacteria in our gut to be healthy, a farm also needs a natural balance.'

'Chemicals don’t discriminate well, wiping out natural biodiversity including ladybirds and wasps. Ironically, these act as natural predators to the aphids which attack the trees, making our trees more vulnerable. The breeding cycle of the predators is much longer than that of the aphids, so you can quickly become dependent on the use of chemicals - the aphids reproduce again quickly, with no natural protection. When you combine this with use of herbicides, you are also destroying the natural habitat of their predators, weakening the ecosystem further.’

Learn more about Magic of Foresters via social media or on their website.

How you can help to protect forests

Plant a tree at Woodoaks farm

Help us plant trees at Woodoaks —a farm donated to our charity. From dormice, bats and bees to butterflies, jays and nuthatches, each tree we plant creates homes for over 130 species of wildlife.
Plant a Tree