He shares some of his tips on the successful management of an organic arable farm, plus some of the opportunities that converting to organic presents and his experience on overcoming some of the challenges.

Chapel Farm, near Pershore, Worcestershire is a 360-hectare arable farm with a further 140-hectares share farmed. It has a diverse mix of arable crops plus a dairy heifer rearing system and has been certified by the Soil Association for 30 years.

The farm was in an impossible blackgrass situation after his father, Richard Steele, grew continuous wheat during the 1970s. Having a heavy clay soil meant the option of growing more spring crops, wasn’t a viable, so Adrian decided to convert to organic and hasn’t looked back since. “We needed more consistency and a balance of specialisation and resilience on farm. The most profitable way to do this was to go organic,” he explains. Blackgrass is no longer an issue on the farm. The removal of artificial fertiliser led to a significant weed reduction after just three years of being under organic status. Today, Adrian runs a six-year rotation of grass leys and cereal crops including spelt, oats, milling rye, einkorn and biscuit wheat. “The longer-term rotation works well with clay as you must be patient with heavy soils to enhance productivity. Current yields reach more than 5t/ha in good years, but 3.5t/ha in bad years,” says Adrian.

“We needed more consistency and a balance of specialisation and resilience on farm. The most profitable way to do this was to go organic.” Adrian Steele, Chapel Farm

“Building soil fertility without artificial fertiliser requires a change of thinking. Instead of single annual cropping you need to think ahead and plan a balanced, mixed rotation to build soil fertility over the long term. It might feel daunting at first, but that initial investment of time pays off in long-term gains. It’s important to have a different mind-set when farming organically. You need to work with nature rather than against it,” warns Adrian.

Farmers can be daunted by the thought of farming without their usual toolbox of pesticides and herbicides. However, organic crops are less susceptible to pests and disease, partly because longer rotations break disease and pest cycles and, by not using artificial fertilisers, plants are less lush and stressed.

Adrian’s key controls are balanced rotation, later drilling and selecting strong varieties. Variable-rate drilling is implemented according to soil type on the farm, with seed rates increased on heavy land and during late autumn drillings. This helps maximise crop establishment and reduces weed emergence. He adds: “Using nature to fight nature by using methods like companion cropping (growing two crops side by side) and encouraging beneficial insects through beetle banks can help to fight pests.” 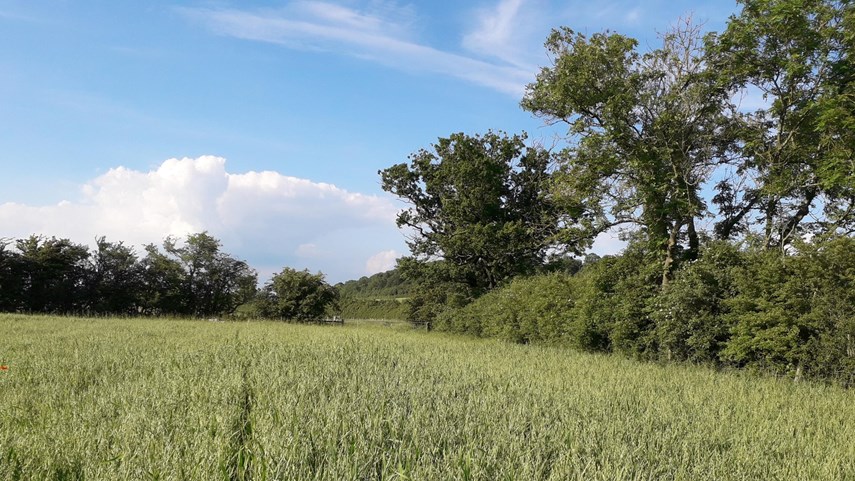 Rotations, which include both spring and winter crops, as well as cover crops help to combat weeds too. “Variety mixes are also more common in organic allowing a range of growth habits, heights and innate resistances to be employed to compete against weeds. Talking to and learning from other organic farmers will help you select the best crop varieties for your area,” he says.

Technology is advancing quickly within the organic sector and there are now increasingly sophisticated mechanical options to control weeds, such as GPS and camera-controlled hoes, interrow cultivators, weed harrows, weed surfers and comb cutters. Another option is to re-introduce grazing livestock as this can provide extra income from the rotation and another biological food chain that can enrich soil health.

Governmental grants are available for English farmers via Countryside Stewardship (CS) to help fund the organic conversion period and ongoing maintenance. Once you are registered with an organic certifier your farm automatically qualifies for mid-tier CS, entitling you to conversion and maintenance payments.

The new Environmental Land Management (ELM) programme will supersede CS, but this is not expected before 2024.

But Adrian is confident CS remains a good option for farmers: “It is not yet clear what practices will be rewarded by the ELM, but the Government has promised that being in an existing scheme at the time of the ELM launch will not be allowed to put farmers at a financial disadvantage, so entry into mid-tier now is a one-way bet to ensure a diversified income stream through a few years of uncertainty.”

The organic market is growing and with increased demand for grains such as spelt and oats, it’s predicted that the area under organic arable crops could increase substantially. With organic premiums of 50 to 100 percent above non organic cereals, arable conversion offers a lot of opportunities.

Looking back over 30 years, Adrian says his soils are now in excellent health with increased soil carbon, root mass and workability, all of which are essential for profitable and sustainable farming. Biodiversity on the farm is much improved, especially insects which help to reduce pest issues and numbers of the Red Listed corn bunting have risen. And there can be some unexpected bonuses says Adrian: “Conversion allows you to release capital costs, such as fertiliser spinners and sprayers, and frees up buildings that can be used for diversification. Diversifying income streams is key and going organic gives you the opportunity to re-position your farm business into an under-supplied market.”

Grants for converting to organic - England

The Countryside Stewardship Scheme provides funding to help farmers and landowners in England convert and farm organically.
Find out more