Sam Parsons, farm manager at Balcaskie estate in Scotland has recently converted the farm to organic in a bid to cut costs whilst improving soil health and natural biodiversity.

Based over 1300 hectares, Balcaskie’s main farm enterprises are beef and sheep with some arable cropping and a small pig herd, supplying into major retail alongside some direct sales made online. Sam shares his learnings and challenges when converting the farm and his insights for successful farm conversion.

Sam and the estate owners converted the farm to organic in 2016 as part of a strategic overhaul of the farm business. He says;

“Key farm metrics such as biodiversity, capital, income and soil health had deteriorated overtime. We wanted to change our system to drive improvements with a particular focus on biodiversity and soil health. We chose organic farming as it’s a simple system and set of principles to follow to promote natural biodiversity.” Sam Parsons, Balcaskie Estate, Scotland

Organic conversion typically takes 2 years when land and animals are managed to organic standards before they can be marketed and sold as organic. Sam converted the farm in stages, converting new land every year when it came round in the rotation.  This gave him and the team time to learn and adapt over time. Sam shares these learnings and the subsequent changes they’ve made to livestock, cereal breeds, and grassland management to better suit their organic system.

As part of Balcaskie’s transition to organic, red meat enterprises were expanded and land was taken out of permanent arable rotation and put into grass for fertility building.

Sam says,  “At the beginning, we tried farming in a similar way to our conventional system but without the use of artificial chemicals and fertilizers, but we soon realised that there were parts of the system that didn’t fit. For example, we were finishing cattle on organic cereals but given that we were no longer growing enough arable crops to feed our cattle and buying in lots of expensive feed, this didn’t make economic sense for us. Instead, we looked at ways to extend the grazing season. Typical native and continental cattle breeds are not suited to finishing on grass outside so we moved to native cattle breeds such as Lincoln Reds which are more suited to grazing outside all year and can make use of grass.” 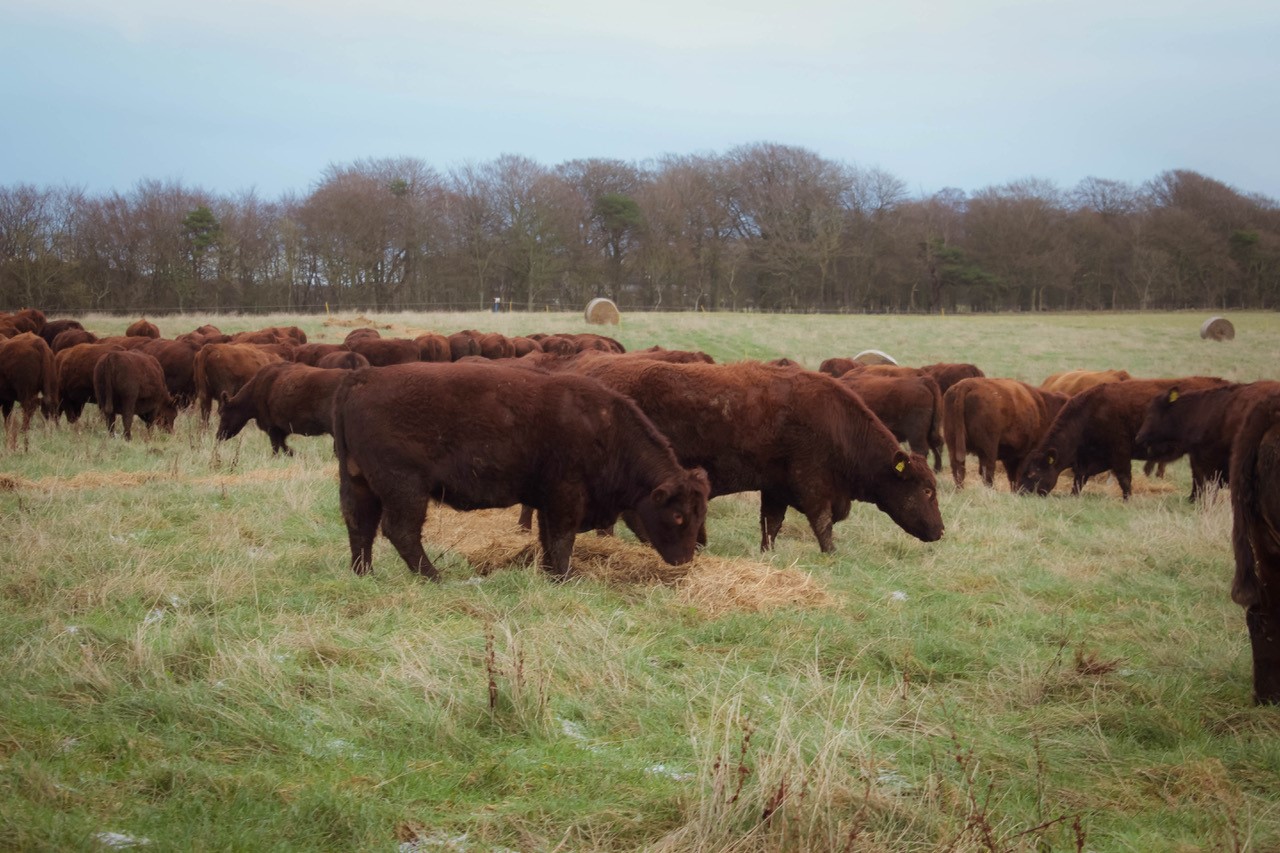 Sam also introduced mob grazing, a short-duration high-density grazing system with longer grass recovery periods to help extend the grazing season and reduce reliance on cereal and soy feeds. Alongside this, he introduced winter bale grazing, and successfully grazed 300 cows outside over winter before coming in for calving. This has been integral to reducing costs, Sam says “The cost savings made through reducing winter housing and expensive feed costs have been phenomenal”.

He explains, “the grass mixes used in our conventional system were providing the wrong nutrition for our cattle; it was high protein but not high energy. Changing to a herbal ley not only provides better nutrition for our livestock but it has helped to significantly improve our soil structure. Deep roots help water infiltration and can access the water table in times of drought, making our farm more resilient to extreme weather.”

Sam and the team also learned that switching their arable crops to types and breeds better suited to organic production and markets would be worthwhile, “We learned that markets weren’t particularly strong for organic malting barley so we switched to organic milling wheats and oats specialising in ancient grains. Native and traditional varieties tend to provide consistent and reliable yields when grown organically and compete more effectively with weeds.”

Sam also accessed financial support to help convert up to 300 hectares of the farm through the Scottish Government’s Agri – Environment and Climate scheme.

“Soil Association Scotland have been fantastic in steering us and linking us up with other farmers who are doing something similar. There’s been huge value in being part of a network of people facing similar hurdles.”

With a focus on biodiversity and soil health, the team is pleased to already see environmental benefits. Sam says, “We’ve done soil tests across random fields measuring metrics such as water infiltration and worm counts and we’ve already seen quantifiable improvements with biodiversity improving above and below ground. We have massive hare population, bird and insect numbers and you can physically see and hear the improvements.”

He admits that changing arable land to permanent grassland initially affected grey partridge populations but they have put in place measures to address this. He explains, “being arable birds that enjoy stubbles, taking land out of arable production did initially affect the grey partridge population. However, we now leave tall grass strips in our mob grazing fields for partridges to nest and feed their young. We’re constantly learning and improving to enhance biodiversity on-farm and the overall impact has so far been hugely positive.” 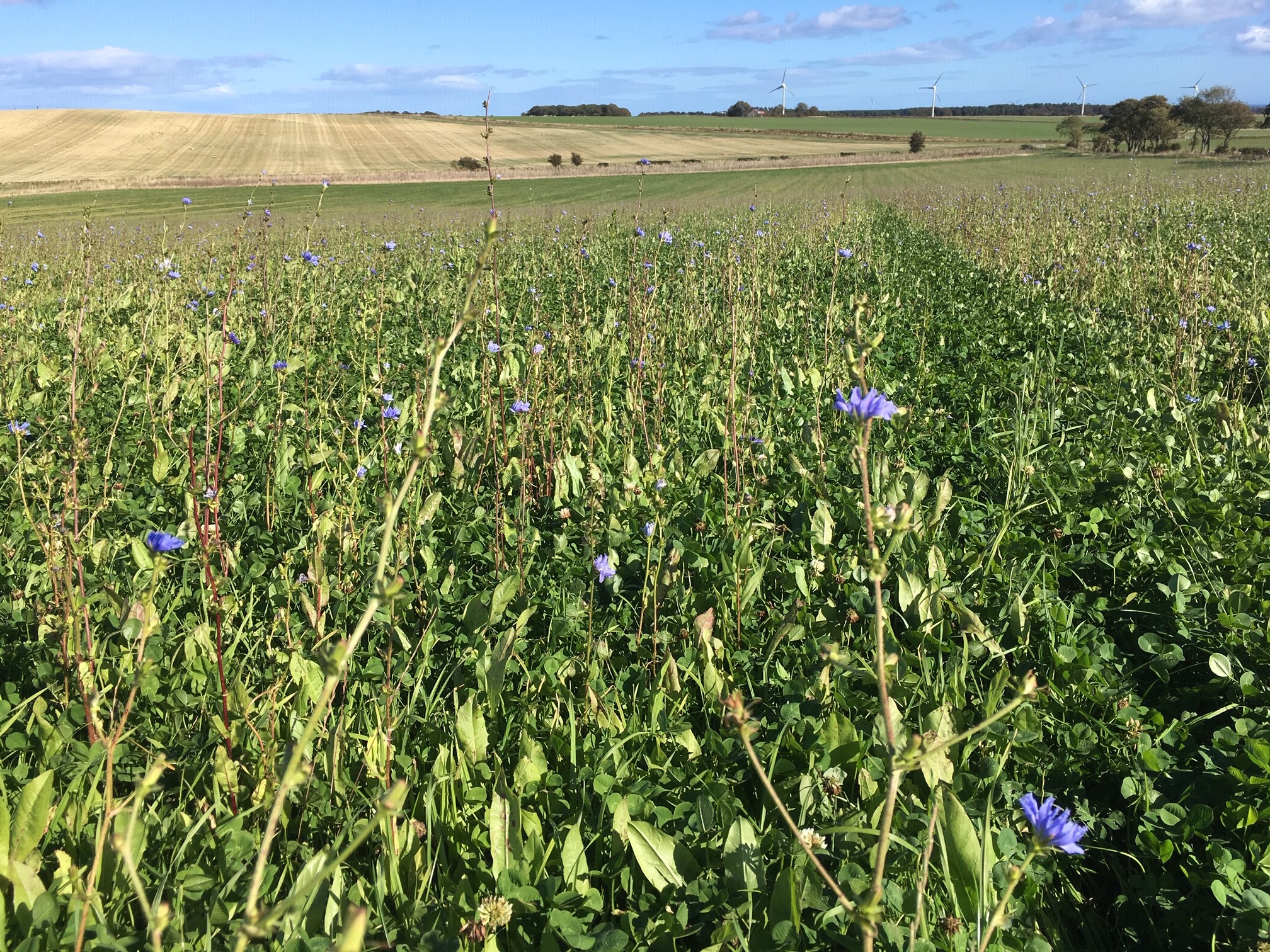 When asked how the farm system is performing economically Sam is positive,  “Economically, we are performing on par with our conventional system, however, we’re doing that whilst significantly increasing employment, soil quality and biodiversity, and over time we expect profitability to increase further. Organic farming requires more planning but you can also afford to take more gambles as there is lower risk and more variable outcomes in terms of yield.

Organic markets are small but growing and if you can get it right, organic pays dividends. The organic market is seeing strong growth and people value the benefits of organic products. Scotland is very well placed for more organic production as it already has the consumer perception of being green and natural. The opportunities in organic are huge but support and guidance are needed, alongside infrastructure change to help upscale organic production.”

Sam’s key piece of advice for farmers interested in organic production is to connect and learn from other organic farmers. He says, “go and see somebody who’s doing it – quiz them and ask them all the reasons why it would be difficult and what they have learned and connect with organisations like the Soil Association who can help to bring farmers together.” He believes that there are huge opportunities for more Scottish farmers to move into organic and that organic production could provide a good entry point for new entrants into the farming sector overall.

Speak to Our Team

For more information on organic certification, phone us on 0117 914 2412 or send us a message.
Get in touch