There is a 200-hectare block of woodland plus a large expanse of fresh water marshland extending to 165 hectares. Approximately 200 hectares of formally cultivated agricultural land has been taken out of production and is undergoing organic conversion and ecological restoration. We spoke to farm manager, Nick Padwick, about why and how he chose to convert and how he is improving the profitability and biodiversity of the farm.

Taking land out of production

Farm manager Nick Padwick has some exciting plans for the estate.  “What we plan to do with Ken Hill is hugely exciting,” says Nick. “We do not want to follow the harsh modern agricultural techniques required to make a profit anymore. Nor do we fancy being so reliant on the farming subsidies we receive from the EU”. For Nick, farming is not about chasing yields, but margins.

In a bold move, Nick and the Ken Hill team have taken 200 hectares of marginal land out of production. As Nick explains: “We had more black grass and brome grass than I’ve ever seen in my farming career which seems resistant to absolutely everything. We needed to do something drastic about it, so we’ve taken all that land out of production. The amount of chemistry we would need to put on it to get half a crop just doesn’t make environmental sense. All we’d be doing is building up resistance, contaminating the water course and further destroying our soil food web. It’s better to just take it out of production and do something exciting with it.”

These exciting plans include ecological restoration and organic conversion. Initially the land will undergo natural regeneration to woodland pasture which will be grazed by wild cattle, ponies and pigs, all contained within an 18-km fence. “Why struggle to grow crops on poor land when I don’t need to?”, says Nick. “And because we’ve taken that land out of production, we’ve drastically reduced our fixed cost targeting machinery and fuel usage. There are lots of positives to look at financially, plus we are potentially doing a lot more for the environment."

In coming to this decision, Nick was also mindful that some of the herbicides he was using may be withdrawn in the future and of course East Anglia soil types (predominantly lighter soils over chalk) are likely to bear the brunt of changes in weather patterns, explaining; “We don’t have any irrigation, so if we continue to see several weeks of intense heat in June or July, the crops wither and yield potential is dramatically affected, putting into question the decision to apply chemistry." 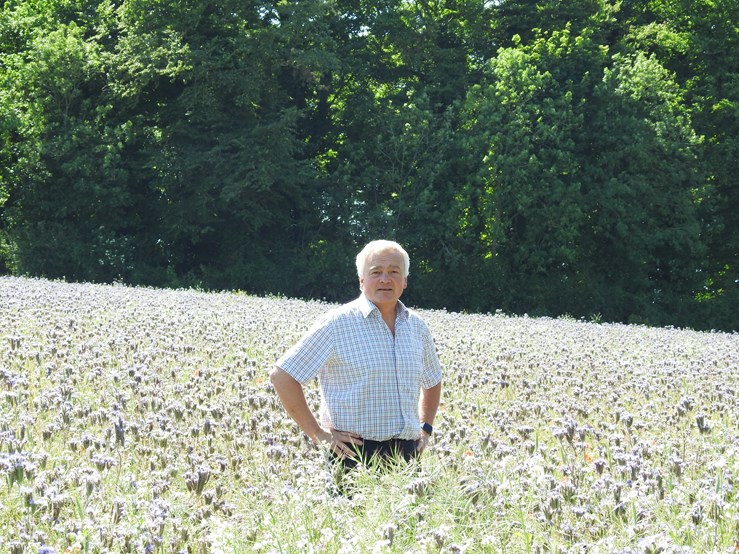 Within the arable area, Nick is improving biodiversity through ‘farming in rectangles’ as Nick calls it. The rectangles are the same width as the machinery, with land outside of the rectangles being given over to wildlife margins. Again, the aim was to improve profitability as well as biodiversity. The margins were not so productive, often being shaded and harder to work. Having a regular shape avoids negotiating difficult spaces and corners, saving time and money. These margins have been planted with insect mixes to boost beneficial insects and natural predators and create important wildlife corridors. Overall, around a quarter of the land area is given over to wildlife, with no loss in income.

The estate uses minimum and no-till methods and avoids the use of expensive synthetics where possible. For example, 50% of the wheat crop has not had any fungicide for four years with no measurable difference in yield.  Remarkably, the estate hasn’t used insecticides for seven years, other than neonicotinoids until they were banned, “We don’t seem to need them. When I compare my yields with our neighbours, ours hold up just as well, we’re spending less and doing more for the environment,” says Nick.

"We don’t seem to need them [insecticides]. When I compare my yields with our neighbours, ours hold up just as well, we’re spending less and doing more for the environment." Nick Padwick - Ken Hill Estate

There are plans to increase the use of cover crops to boost soil fertility and reduce the dependence on fertilisers. Nick is using their Countryside Stewardship options to help with the timings of cover crops and build up soil fertility. He is also trying out companion cropping; using combinations of oats and peas, and barley and peas.

There are exciting plans for Ken Hill Wood too. This partly ancient 500-acre wood contains a large block of conifers where there is little light and no understorey. Management plans include selective felling and restoration of the ground layer to encourage biodiversity. It will be grazed too. And more controversially, the farm has a licence to introduce beavers into the section of woodland that is part of the ecological restoration area, the aim being to stem the flow of water off the land.

Along the shoreline, the marshes have undergone water penning or hydrological modelling, moving tonnes of earth to create a high level water system that means the former grassland will be under water for half the year, attracting waders and wildfowl. In summer it will be grazed by cattle.

The future is bright

The future for Ken Hill is diversification, with less emphasis on traditional farming and more on biodiversity. The plan is to create an attraction for people to visit to see wildlife, and go on safaris, all creating extra revenue streams alongside farming.  It’s a way for farmers to reinvigorate their business.

Grants for Converting to Organic - England